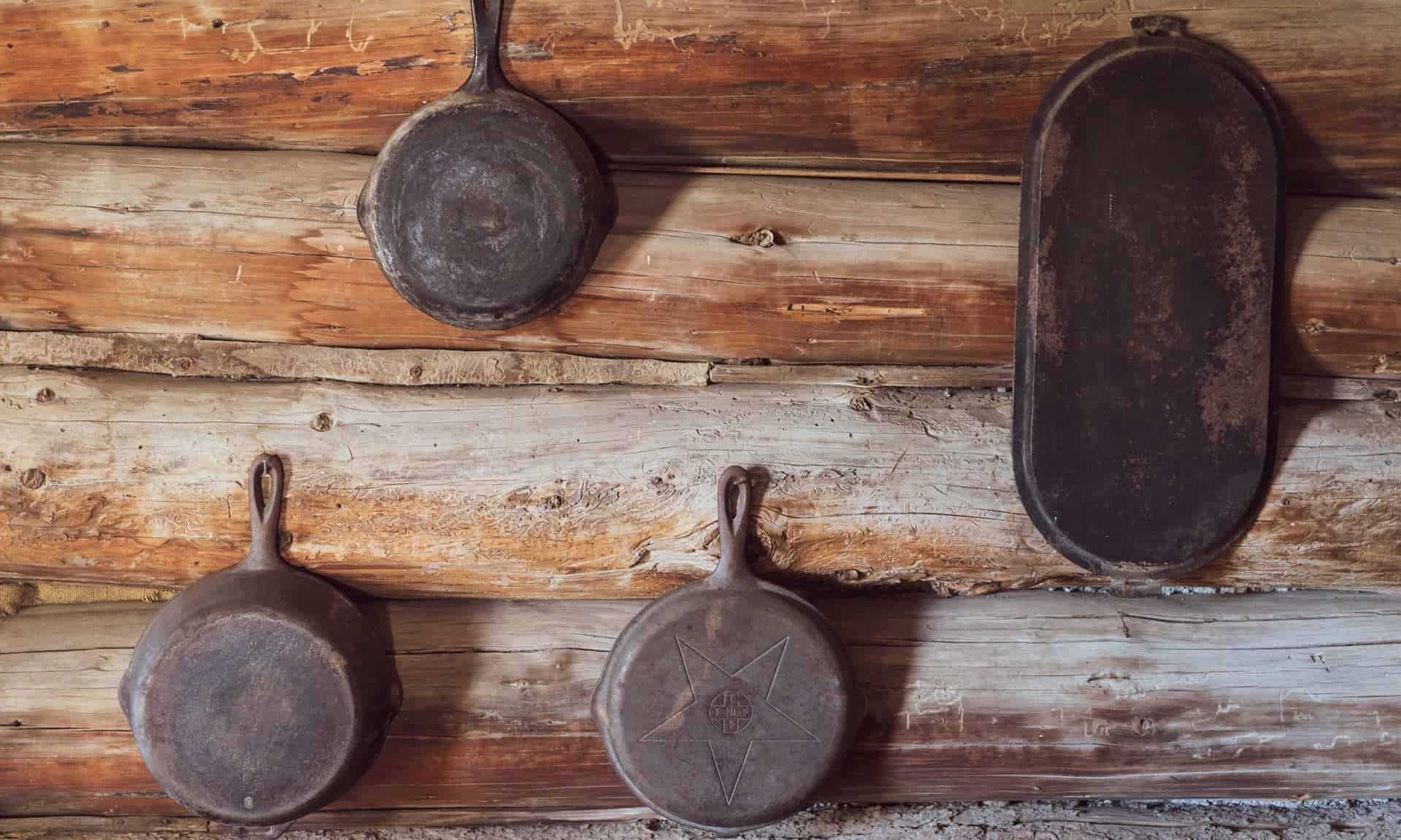 Cast iron skillets can survive for decades or even centuries. And if they’re well taken care of, they get better with time. Meaning the older your iron pan is, the better its quality, and the more reliable its performance. This is because cast iron skillets – if they’re well-seasoned and maintained – will develop a permanent non-stick patina that gives amazing cooking results.

It’s also the reason why garage sales, estate clearances, and storage container options are the best source of cast iron skillets. If you buy a new one from the store, you have to season it from scratch, and it will take years to ‘grow’ your own patina. But if you buy an antique pan that’s 20, 50, or even 100 years old, you can restore it to perfection and you’re set. But how will you know?

After all, if the pan has been sitting in storage for years, it will look neglected and abandoned. It will also be rusty and caked with mud and debris. So unless it has a trusted brand name on it, how will you know it’s a good quality iron skilled as opposed to a blackened tin pot or a pan that’s rusted beyond recovery? Let’s explore tips on how to identify unmarked iron skillets.

How to Identify an Unmarked Antique Cast Iron Skillet

Tip #1: Start with the Brand

When you spot a cast iron skillet at the junkyard or flea market, it could be a hundred years old. So it helps if you review common cast iron brands before you start scouring salvage piles. If you have an overview of top brand characteristics, it’s easier to identify them when you see them.

For example, Cuisinart and Le Creuset cast iron pans have bright, vibrant colors. Brands from the 1800s include Griswold/Erie, Wagner, and Lodge while Le Creuset and Krampouz started in the mid-1900s. Check online to see the trademark characteristics of these skillet brands.

Some cast-iron pans were deliberately unmarked because they were sold directly to stores. So a pan intended for Woolworths wouldn’t have a Lodge or Wagner label on it. But if you pre-checked the characteristic of the brand, you can tell who made it, even without their ‘signature’.

Another useful trick is to use ‘Google Images’ and study marked cast iron pans. You can memorize their distinctive features. That way, you can recognize those hints and tell-tale features even when they don’t have a distinguishable brand name stamped above them.

And if the pan has even the slightest marking on it, you can look that up. It may be a fragment of a brand name like ‘&’ or ‘5’ and that could possibly help you spot a Birmingham Stove & Range. If you have a smartphone, take a clear photo of your pan and upload it to Google Images.

If you post the saved photo directly in the ‘images search bar’, your search engine will pull up similar images and that could give you vital clues about your pan. If it’s a photo on a website like eBay, the image search might show you the source of the photo leading to further identification.

Modern-day Lodge pans have the egg-logo which consists of an egg sitting inside a skillet. The bowl of the skillet is the ‘o’ on Lodge. Older Lodge pans might just have the word ‘Lodge’ written on them, or maybe a number. Similarly, Griswold pans were initially marked ‘Erie’.

This was because the company was formed in Erie, Pennsylvania, but the logo later changed to Griswold and later Wagner Ware. So check out antique sites of just Google ‘vintage logos’ so you know what to look for. With enough research, you can identify the antique pan at a glance.

We have a complete guide about Griswold cast iron pan if you are wanting something more specific.

If you’re insistent on where your pan was made, look for an origin marker. It may be embossed, recessed, or carved onto the pan. After 1960, American-made pans had to stamp ‘Made in USA’ in clear letters. Before the 60s, you didn’t have to indicate the source country of your pan.

So if your pan has embossed letters and numbers, it was probably cast later. The bottom of the pan will often have other details too. It may be marked SK for the skillet, G for griddle, or DO for Dutch oven. These letters are common on vintage Lodge cast iron pieces.

Other brands (like Wagner) will sometimes use letters instead, like H. Pans are also sometimes marked with model numbers like 8, 10, or 90. The numbers might match the gas numbers on your cooker, or they might be a code to show you the diameter of your cast iron pan.

While cast iron pans haven’t changed much over the centuries, cooktops have. In the past, we cooked on stone hearths or log fires. Then we moved to charcoal grills, electric coils, and finally induction plates. Pan designs have adjusted to keep up, so your pan’s cooking surface is a hint. Some pans (e.g. Lodge pans) have recessed heating rings on their outer edges.

These were intended to snugly fit your electric heating filament. Other pans have extruded heat rings (e.g. Griswold pans), or they might have three or four projecting nodes or notches. These nodes or notches enable your pan to sit on gas grills or electric heating plates without slipping off. Lodge pans commonly used between one and three heating notches at the bottom.

Newer pans may have concave bottoms for heat distribution. The numbers at the bottom could be a hint too. We’ll go over that in detail later, but if it’s a 3, 5, or 7 (with S), it’s probably an economy skillet from Birmingham Stove & Range (BSR) or Lodge. If it has a 3 or 4-digit code with a three-hole handle, whether the numbers are slanted or straight, it could be a Griswold.

One of the distinguishing markers of a pan is the sides. This includes the depth (frying pans are shallower than skillets) and the angle (sauté pans have straight sides while frying pans have flared sides). But some saucepans have pour spouts. In older pans, the pour spouts were bigger.

This is because the tools for making spouts weren’t as advances as today, so the dips were more defined. Also, older pans had two pour spouts while newer ones might have one. Contemporary cast iron pans might also have a helper handle and non-stick coatings, which are both newer.

While you’re at it, check the inner surface of the pan. Wagners often have spiral grooves tooled onto the inner base while Griswolds are flat. Lodges are sometimes rough with pebbly textures. If your cast iron pan has a dimpled or hammered finish, it’s a much younger model. On the other hand, if your pan has two short handles and a dimpled lid, it could be Birmingham.

Tip #7: Look Closer at the Handle

We’ve already mentioned modern cast iron pans may have an extra mini-handle. Also, these handles may be riveted onto the bowl of the pan, and are generally made of stainless steel. Older cast iron skillets have integrated handles that are part of the bowl with no screws or rivets. They also have a smooth finish, unlike modern cast iron which may be grooved for silicone grips.

Wagner pans often have a little v-shaped ledge between the bowl and the handle. This ledge is a dead give-away because it’s identical on marked and unmarked pans. Wagners and Griswolds have a triangular-shaped wedge on the rear side of the handle while others are rounded. The wedge nestles in your palm, unlike other brands whose ergonomic curves are comfier.

Birmingham Stove & Range pans have extruding heat rings and triangular handles too, but they don’t have the flattened ledge between the bowl and the handle. Their handle hoops also have a distinctly dipped section towards the center of the hole. You don’t see that on Wagners. That said, Griswolds and Wagners are similar, especially after the two manufacturers merged.

Tip #8: Get information from books

Lots of modern writers like to research and write non-fiction historical tomes. But brands do it too. It’s part of their history. Two such volumes include [aawp link=”0764311913″ title=”The Book of Wagner & Griswold, Martin, Lodge, Vollrath, Excelsior”]. It’s sometimes called The Red Book from 2001.

A more recent sample is [aawp link=”0764337297″ title=”The Book of Griswold & Wagner, Favorite, Wapak, Sidney Hollow Ware whose 5th Edition came out in 2013″]. It’s better known as the Blue Book, and these two books show clear references of cast iron pans. Study them carefully before you shop, and carry copies in your car while you’re out hunting for skillets. You can even buy digital versions of the book.

Tip #9: Look into the Numbers

Almost all pans have a letter or number at the bottom. Every number has its own significance. It may refer to the outer or inner diameter (for flared pans), the year and place of manufacture, or the pan model. Wagners have their number (and letter) written on the handle of the pan, not just the bowl. The handle markings are repeated at the front and back of the handle.

Meanwhile, Griswold pans sometimes have italicized 4-digit codes on the back of the pan. These are likely to be part of the Iron Mountain Collection. The shape of the number helps too. Lodges from 1900 to 1930 often have embossed numbers while other brands are recessed. But if it has no letters or numbers, it might have a gate mark. This is a distinctive, sometimes raised slash.

This mark runs across the outer bottom of your pan. Gate marks won’t tell you the brand of your pan, but they’ll identify it as an antique. Gate marked pans are almost guaranteed pre-1890. If the pan has an underlined, hyphenated, or sideways number, it could be a Vollrath pan. If the number sits inside a diamond shape, it’s probably a Chicago Hardware Foundry Favorite (CHF).

We’ve mentioned unmarked pans were often manufactured on behalf of big-name department stores. These stores would re-brand the pans in the same way Walmart does today. But other companies took a different approach. They’d buy trademarked pans, scrape off the original markings, and remarket them under the Wapak brand name. These ‘knock-offs’ are prized.

Not just for their original quality, but for their collectors’ value. So if you find a cast iron skillet with rough file marks, see if you can identify the ghost of a logo beneath. Sometimes, the ghosts were leftover because a counterfeiter mimicked an original brand mold. And while these fakes aren’t a brand in themselves, they speak to a specific point in time, and that adds value.

Fakers used these molds to make cheaper pans and resell at the original price-point, and these fake pans are collectibles too. The most commonly ghosted brands are Griswold and Wagner, which were later acquired by the same company. So if it’s a specter, it’s probably one of these. If you want to know the exact age, check the Wapak logo – it has different versions for given years.

So how will you identify an unmarked cast iron skillet?

Do you have a cast-iron skillet in your pan collections? Show us a photo in the comments!