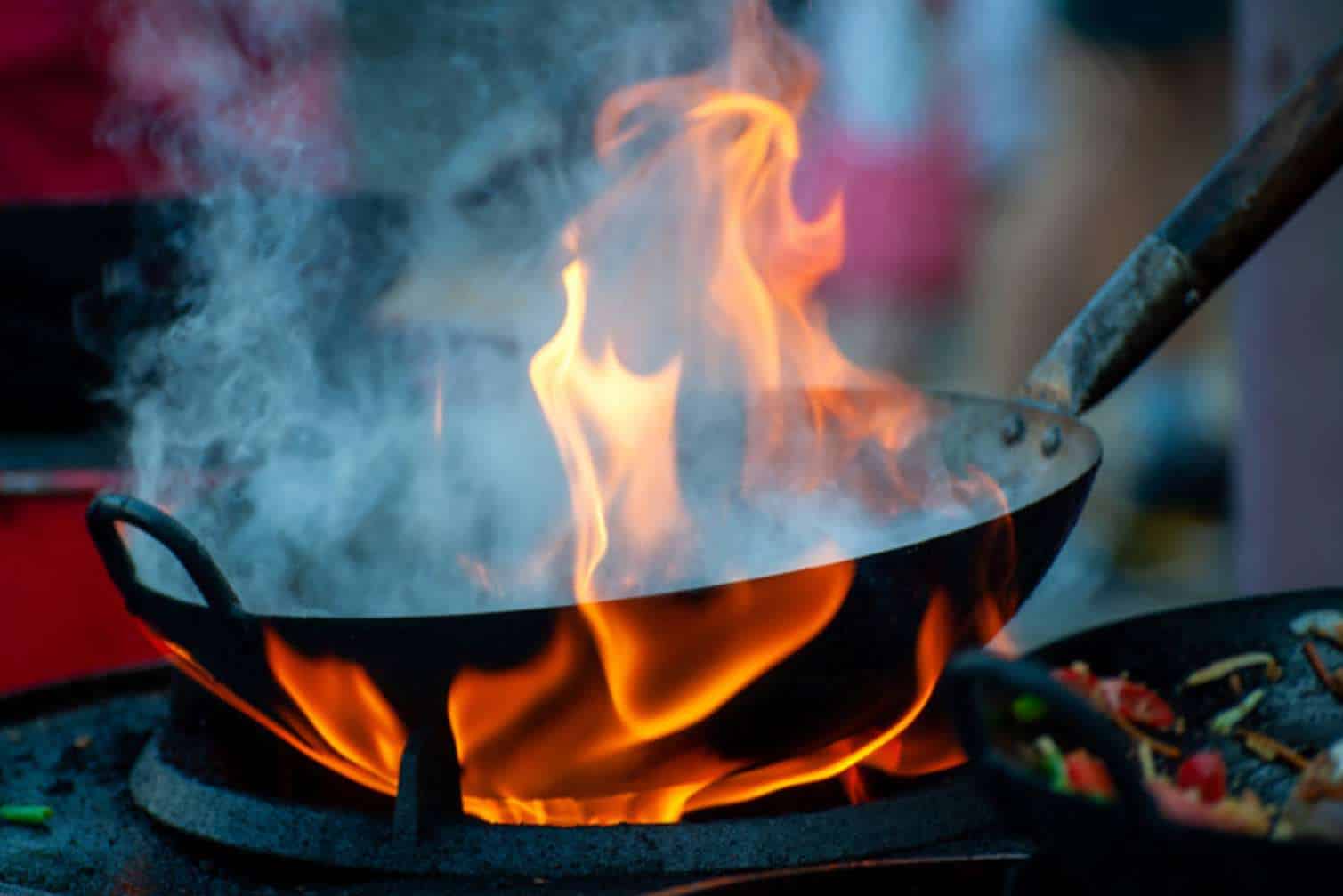 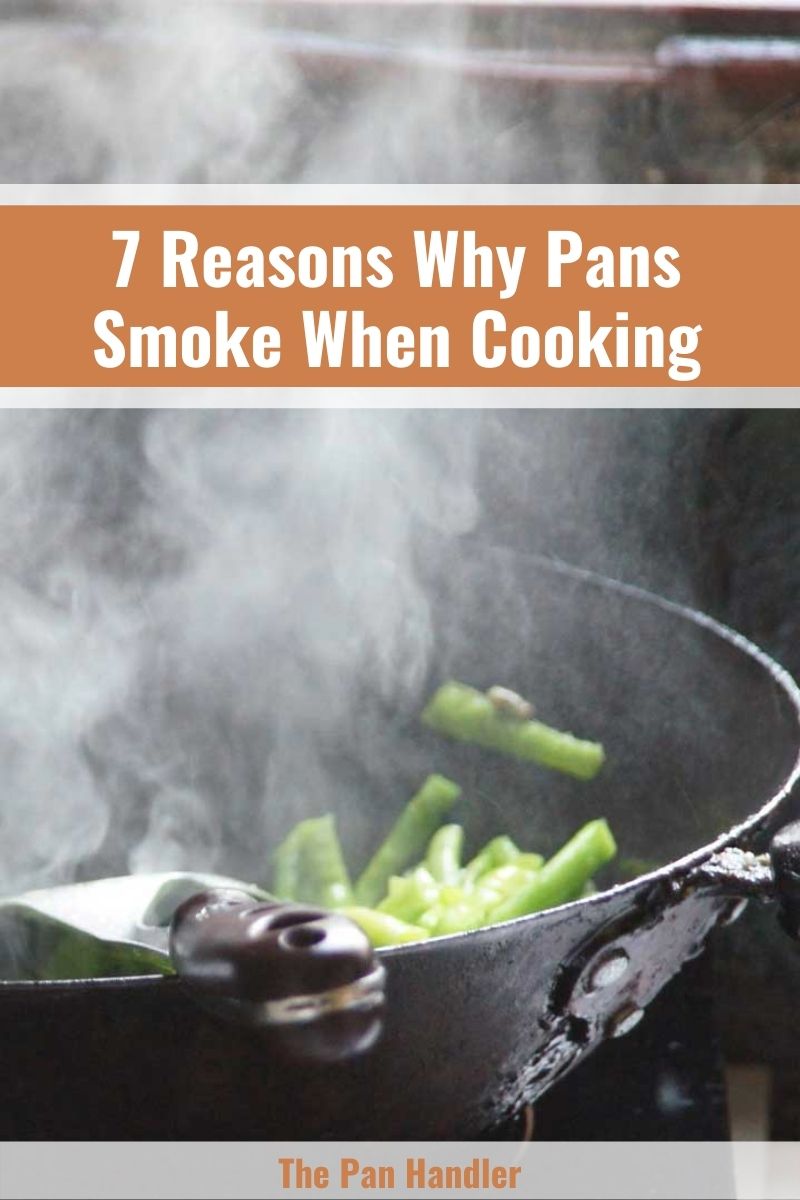 Pans have many uses in the kitchen. They are used to prepare various recipes and dishes. However, there are times when your pans generate an excessive amount of smoke while in use. What causes your pans to smoke?

A smoking pan poses several problems. This article will explain why pans smoke when cooking and avoid them from smoking in the future. Continue reading to learn more. 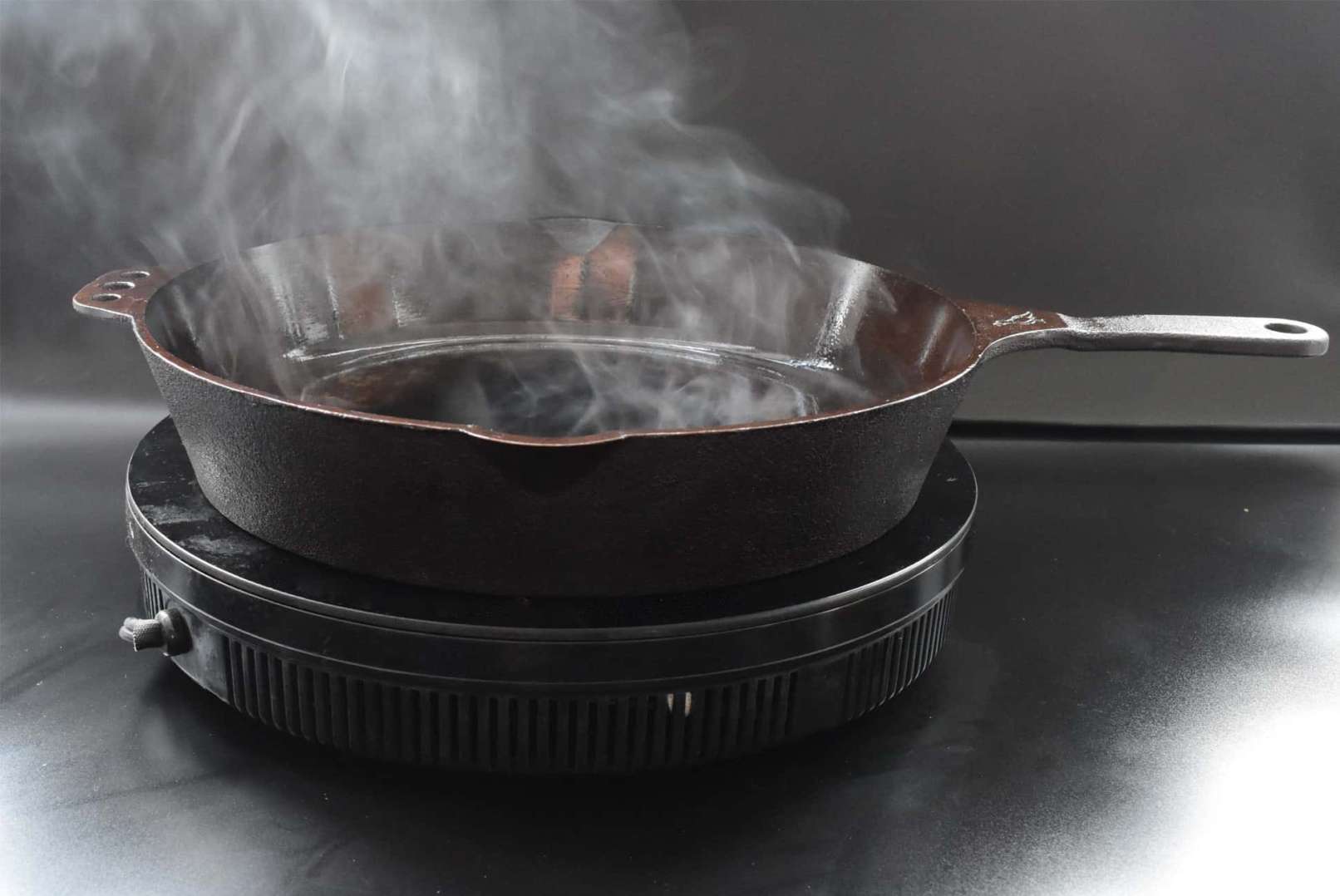 Pyrolysis is a thermochemical breakdown process when organic material is heated to a high temperature. This mechanism is why pans smoke. Pyrolysis occurs when there is no oxygen present and results in chemical and physical changes to the substance. In short, when hot cooking oil comes into touch with the cookware surface, chemical reactions occur, resulting in smoke.

What is a smoke point?

The point when an oil begins to emit smoke is the “smoke point.” At high temperatures, oils decompose into free fatty acids that will function as fuel to start a fire. In frying, the oil’s smoking point differs depending on the type of oil you use.

Cooking at high temperatures necessitates oils having a higher smoke point to avoid the production of smoke and fumes that may harm the food you cook.

Seven things that cause your pans to smoke

Just about every pan will smoke, even the new ones. Smoking can be triggered by several different reasons, but the good news is that it is preventable.

Pans can smoke if there is too much heat, the pan contains soap or oil residue, the pan is not seasoned, the pan is damaged, the pan is unclean, or the non-stick layer is gone. To better understand this, let us delve deeper into each of the factors.

As the saying goes, if there is smoke, there must be fire. Number reason why pans smoke is excessive heat. Smoke comes out from the chemical reaction of overheated cookware. Overheating can also cause food to cling to the pan, leading to burning and the formation of smoke.

There is a chance that smoke will originate from the food or the metal. Using a pan with a thick base might delay the smoking; however, no matter how thick your base is, it will start to smoke when the temperature is raised even further.

The pans might also smoke if there is a buildup of oil or soap residue. Most frying oils have a smoking point of 450 degrees Fahrenheit. Toxic black smoke is released when these oils are introduced at these temperatures or above. Oils oxidize due to this natural process, but it is entirely harmless.

It’s also possible that any soap residue left on your pan after washing could result in smoke when you reheat it. The soap starts smoking when it reaches roughly 1000 degrees Fahrenheit. It’s called a “flashpoint” for soap. This is the point at which a specific organic chemical begins to give off vapor and catch fire when exposed to the atmosphere.

Seasoning your pan adds an additional layer of protection against food and residue to stick to it. When you season your food pans, you create a non-stick surface that makes removing food from the pan easier. There’s no rust or corrosion with the protective layer on.

It also makes it so that food slides right off it without getting stuck. An unseasoned pan is prone to smoking because the refined oil used to form the non-stick layer causes smoke when the pan is cooked at a specific temperature.

Damage on the surface

A pan’s surface can be uneven due to physical damage, such as dents and scrapes. Using these pans at high temperatures will cause uneven heating on the surface. Smoke will be produced more quickly in the thinner parts.

When the pan is bent, the heat may be unequally distributed. The food on one side of the pan may smoke and burn because it receives more direct heat than the other.

If your pan is unclean and still contains food from a prior meal, heating it again will almost certainly result in burning and smoking. When exposed to direct heat, accumulated food will always burn. Because most frying pans are dark in color, it’s sometimes tricky to spot leftover residue. Heating this accumulated food residue will cause it to burn and smoke.

When the non-stick coating on your cooking pan is beginning to wear off due to age, even the tiniest damage might cause it to become brittle and break. Afterward, the non-stick layer begins to burn and emit smoke as it is heated over a stove.

Many experts agree that non-stick cookware should be used for at least five years before it has to be replaced. Your pan may begin to peel after you’ve removed it from the heat source.

It’s also possible that you’ll mistakenly believe that the meal itself is smoking. Some meals, such as dry ones, should not be heated for an extended period. Due to their high rate of burning, other foods should not be cooked for long periods.

A lot of liquid or water can also be found in foods. Boiling causes steam to be mistaken for a smoke when it reaches a specific temperature.

Why do non-stick pans smoke 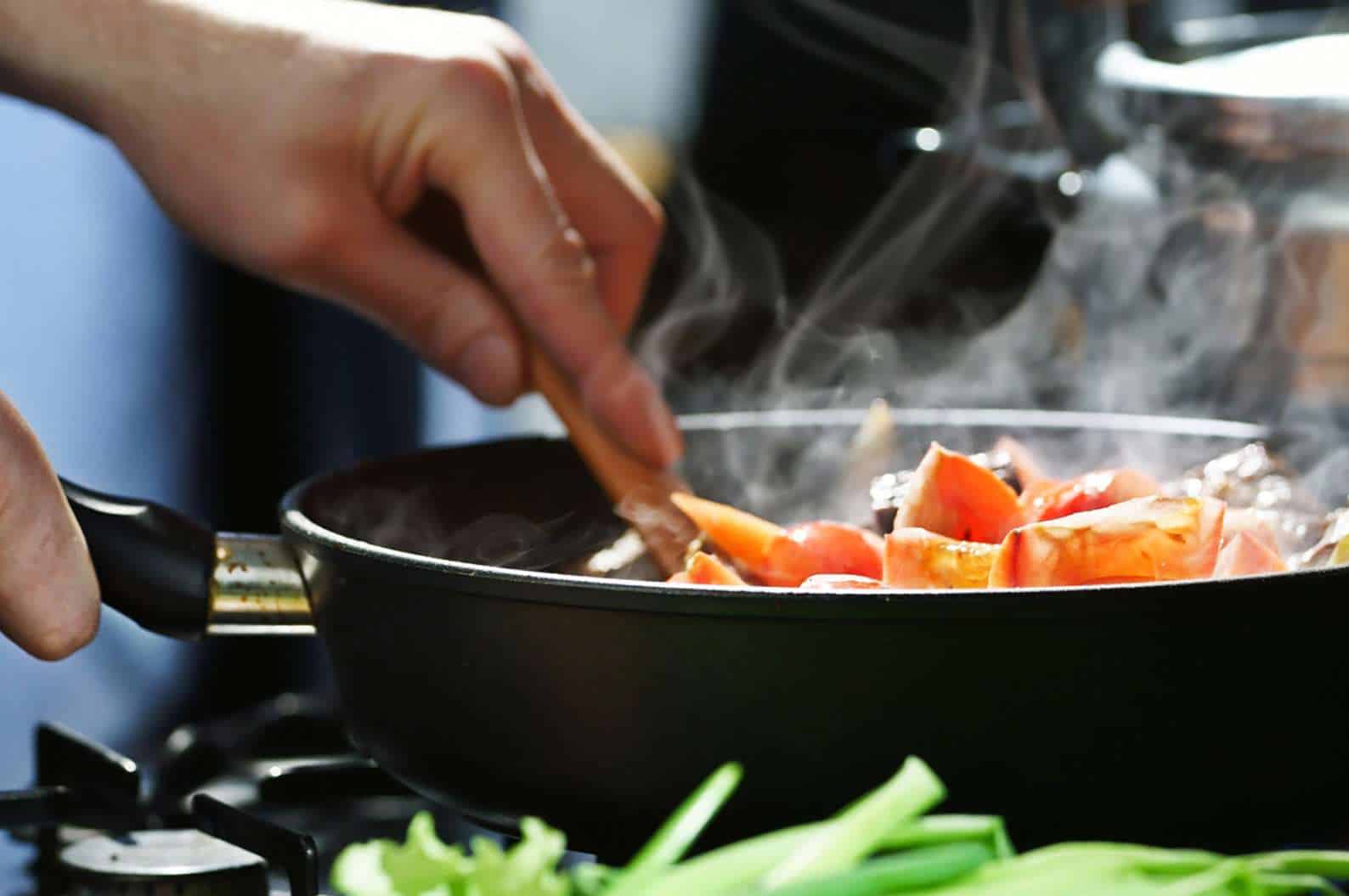 Since non-stick pans use less oil and less oil warms up faster, they are more likely to smoke. When pans with non-stick coatings are not utilized properly, they will smoke. High temperatures are too much for this coating to handle. Using a pan with an improperly sized or improperly heated utensil might permanently ruin its non-stick coating.

Cookware that has a non-stick coating should not be heated above 500 degrees Fahrenheit at any time. In addition, the black surface obscures the oil’s movement. Avoid carbonized oil buildup by using refined vegetable oils to withstand higher temperatures. Smoke will be emitted from a non-stick pan if it is overheated. 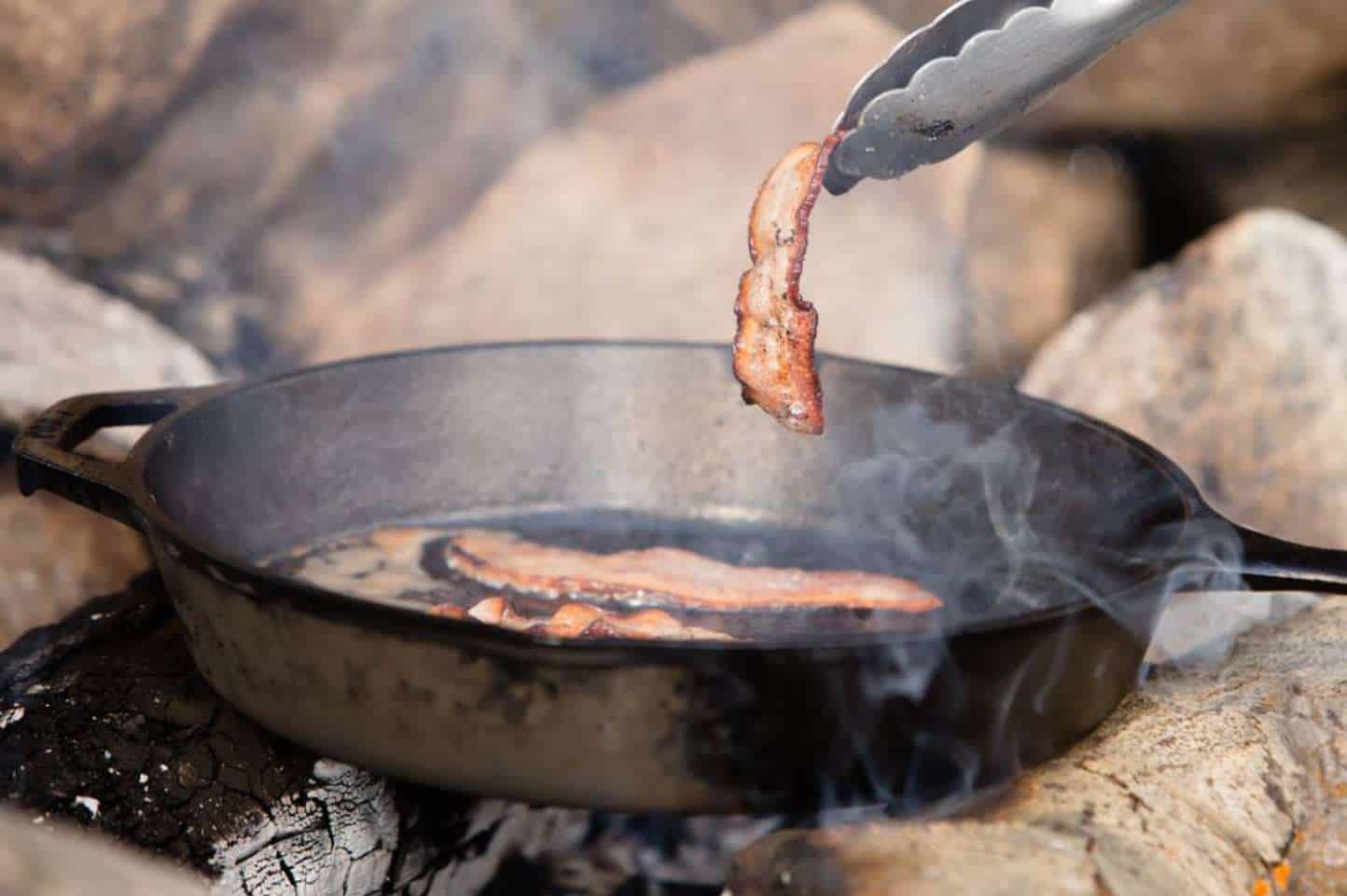 Because of the pan’s durability and high heat resistance, cast-iron skillets are frequently used in the kitchen. However, a typical complaint is that their pans smoke during cooking. The most typical cause of this smoking is because the skillet has not been seasoned well.

Cast iron pans can also begin to smoke when heated rapidly because the pan hasn’t had time to get to a safe temperature. Turning down the heat and allowing the pan to heat up more slowly is generally all that is needed to remedy this situation.

A cast-iron pan will not smoke if it is preheated before adding other liquids or ingredients. Before adding your ingredients, heat a small quantity of oil in the pan until it shimmers.

Why do stainless steel pans smoke 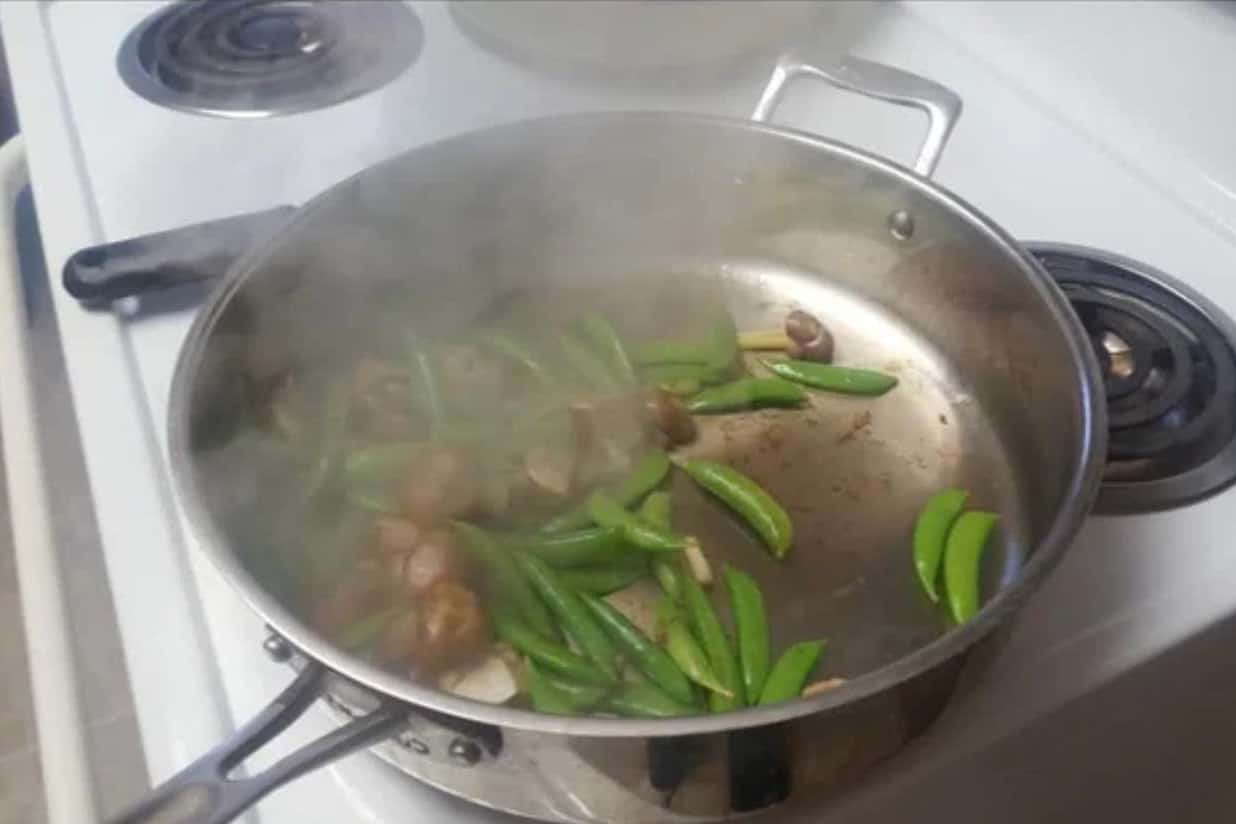 Stainless steel is frequently recognized for its sturdiness and heat resistance. When stainless steel cookware smokes, it’s possible that the pan isn’t the source of the smoke. It is the oil or the ingredients of the food you’re cooking.

If you heat up a pan with some fat and the temperature is too high, the fat will start to smoke. Toxic substances are released when this happens, which can be damaging to your health. If your stainless steel pans are smoking, you may want to consider the following issues.

Valuable tips to keep your pans from smoking

As mentioned in the first part of this article, smoking pans can be avoided. The following guidelines will help you prevent your pots and pans from smoking as you cook.

Not just to prevent the smoke, thoroughly cleaning your pans is a must in all situations. Use a dishwashing soap that has the capacity to remove the grease and oily residue from cast iron, copper, or aluminum.

The pan’s surface will harden if you don’t remove the fat. You’ll see smoke coming out of the pan if you heat it up with cooking oil again because of the oily residue.

You can keep maintaining the right temperature by using a cooking thermometer. It will help you adjust when you see that it has almost reached the required temperature. A thermometer will keep your food from reaching the smoke point of your cooking oil.

The oil that has been heated for a lengthy period of time will eventually reach its smoke point and begin to emit a cloud of smoke. As a result, lowering the temperature to medium-low will entirely eliminate the danger. The items you prepare won’t be burned as a result.

Instead of using non-stick pans, cook with cast-iron or stainless steel

Cast-iron and stainless-steel cookware are the most reliable for cooking at high temperatures. Quick heat absorption and uniform heat distribution are hallmarks of their design. Most importantly, the materials used in this cookware are long-lasting and simple to maintain.

Season your pots and pans properly

A well-seasoned pan not only lasts long but also it serves the user better. Regularly seasoning your pots and pans give extra protection to the cooking surface so the food does not burn which can cause the smoking.

Many factors can cause pans to smoke, including high heat, soap and oil residue, improper seasoning, damaged surfaces, filth, and worn-out non-stick coatings.

Smoking can be avoided by avoiding high temperatures, using high smoke-point oils, cooking in cast-iron or stainless steel pans, carefully cleaning the pans, keeping an eye on the food temperature, and seasoning the pans properly.

4 thoughts on “7 Reasons Why Pans Smoke When Cooking”