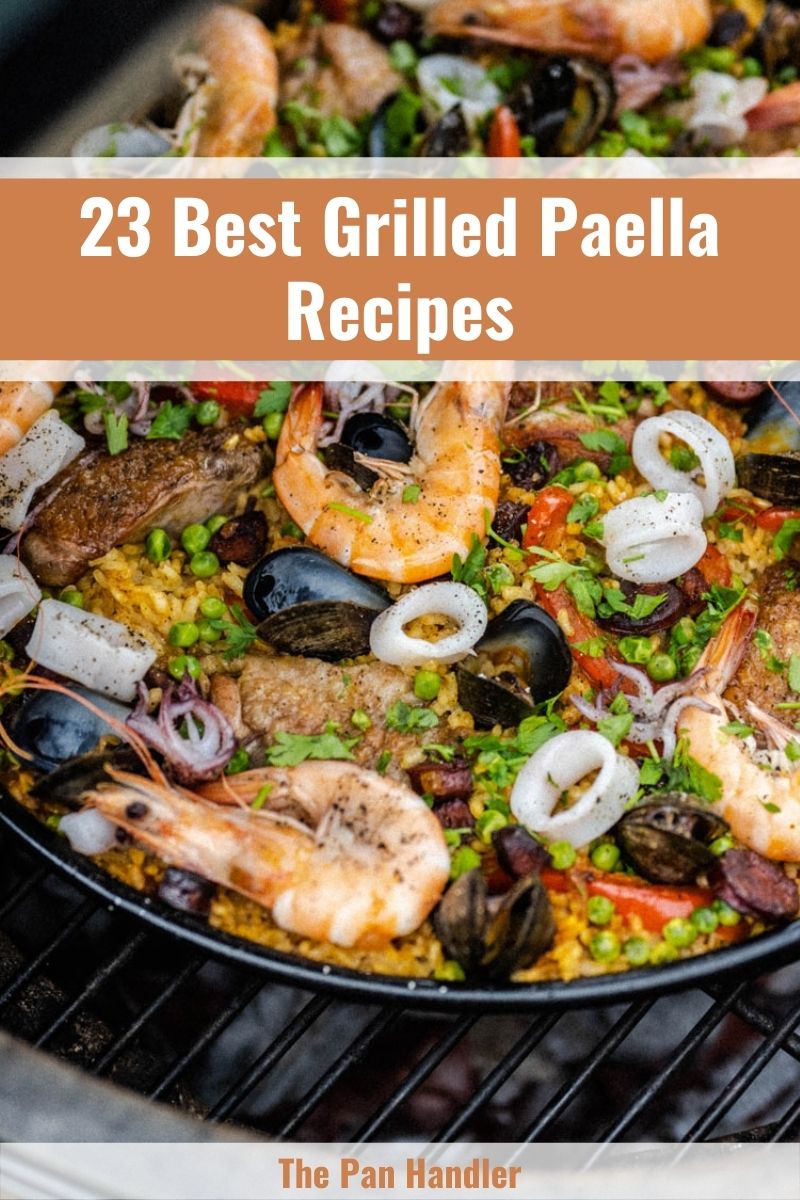 Paella is a world famous Spanish dish that consists of rice, saffron, chicken, seafood and vegetables that are cooked and served in one pan. There are many variations of the dish, but one thing is for certain, regardless of the variation, this is one of the most delicious dishes that originated out of Spain. 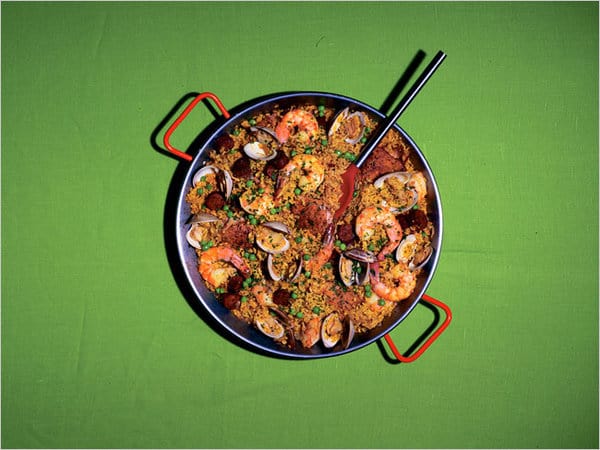 This dish is prepared with a special type of rice, arborio. This is the standard paella dish consisting of chicken and chorizo meat. It’s a decadent play on flavors. Keep in mind that the rice quantities are rather larger for this type of dish and can be altered to include a smaller portion of rice to accommodate a smaller group of people. Pair this dish with a Chardonnay from Sonoma.

This is considered to be an authentic Spanish paella recipe. This recipe promises an explosion of flavor while also maintaining the rice as the star of the show. You can expect to find mussels, shrimp, and calamari, amongst other ingredients in this dish.

The paella dish is cooked with fish stock to add even more flavor to the ingredients. The liquid is cooked down until you are left with the most appetizing seafood dish.

3. Paella for a crowd 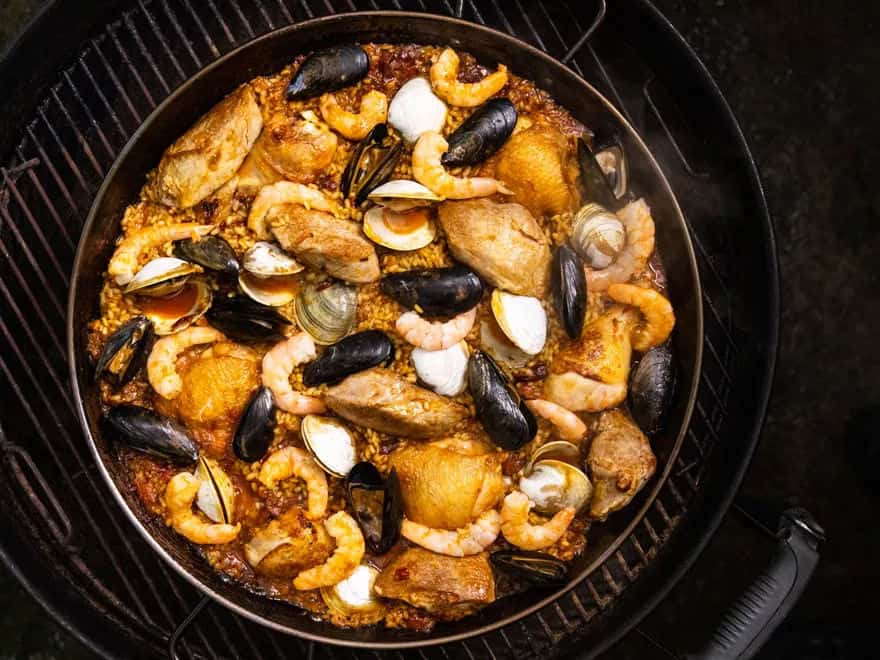 The focus of this recipe is not so much how unique it is to the other recipes on this list, but instead, how to feed a small crowd. Expect larger quantities of ingredients. The ingredients are similar to a standard paella. The exception to this recipe is that it includes clams as well as rabbit, chicken, and vegetables. But, be sure that this recipe will be a crowd pleaser.

While most of the recipes will seem similar to each other, and for the most part they may be, there are a few alterations here and there that make each recipe unique. This recipe includes, among other things, red chili flakes, onions, bell peppers, mussels, prawns, and squid. The key to making this paella is to simmer it over medium heat for about ten minutes.

4. Paella on the grill 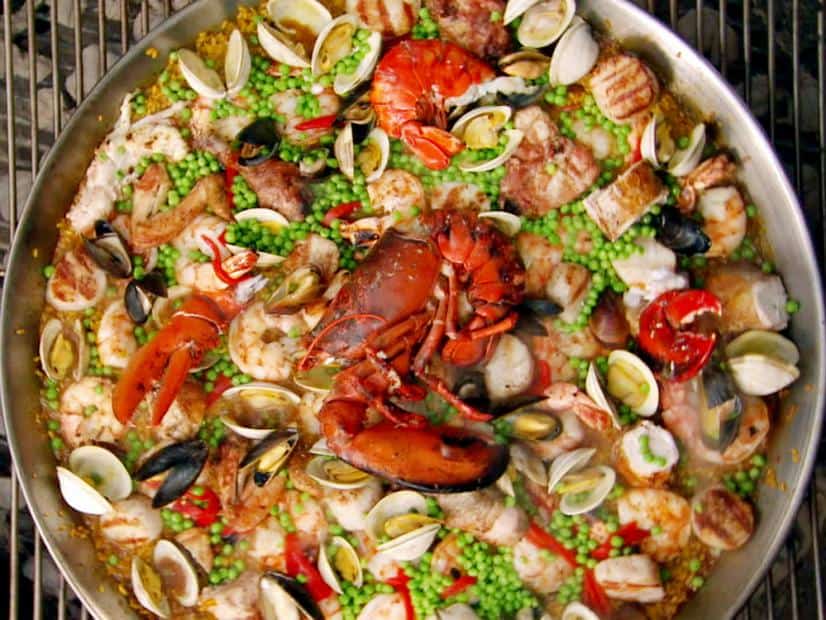 What would a paella be without lobster? This recipe is an elevated version of the standard paella. While it does include all of the main ingredients in a standard paella, it is elevated by adding lobster to the paella.

In addition, the lobster changes the flavor profile of the entire dish. Another key feature of this paella is that it not only includes chicken and chorizo but also scallops, peas, and piquillo peppers.

This next recipe demonstrates how to prepare paella as a beginner, intermediate, and professional. It highlights the simple steps to creating a basic paella as well as more advanced steps to creating a more refined flavor profile for this amazing dish. Some of the recipes include basic ingredients, while others include what is considered a surf and turf variation.

6. Paella on the BBQ

This paella recipe incorporates the act of cooking Catalan-style meat. Other ingredients include pork and chicken. Sherry gives this paella a deeper, sweeter flavor profile.

Seafood ingredients include clams, mussels, and prawns. Padron peppers are grilled on the BBQ to help release their flavors before being added to the paella dish. Parsley and spinach add color and texture to the paella.

The true origin of paella is from Valenciana. Green beans, white beans, paprika, snails, and rosemary are part of the ingredient list for this paella. This is truly where the dish originated from and this recipe captures the true essence of what paella really is.

The secret to creating a perfect paella from Valenciana lies in the wood that is being used to cook the dish as it adds a smokey aroma to the dish. 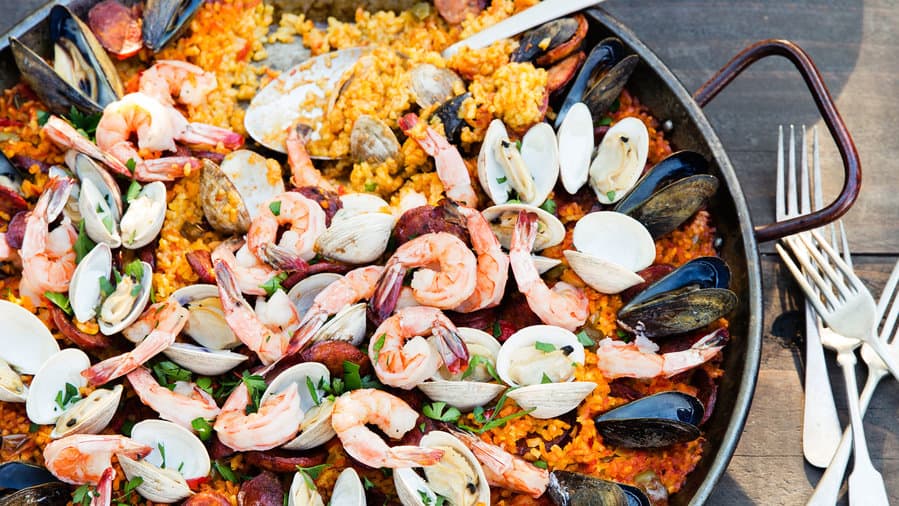 Most chefs will agree that a dry white wine is a must when making the perfect paella. And that is exactly the case with this recipe. It incorporates a dry white wine which dramatically changes the flavor profile by adding elements from the wine to the dish. The good news is that the wine used in cooking can often be paired with the dish as well as drinking wine.

This recipe is absolutely bursting with flavor. The ingredients list means that there will be extra food or that this dish will be able to feed plenty of mouths. Saffron and paprika are the secret ingredients in this dish. It is a very basic paella recipe that is very easy to follow. This delicious Spanish-inspired dish is finished off with parsley. 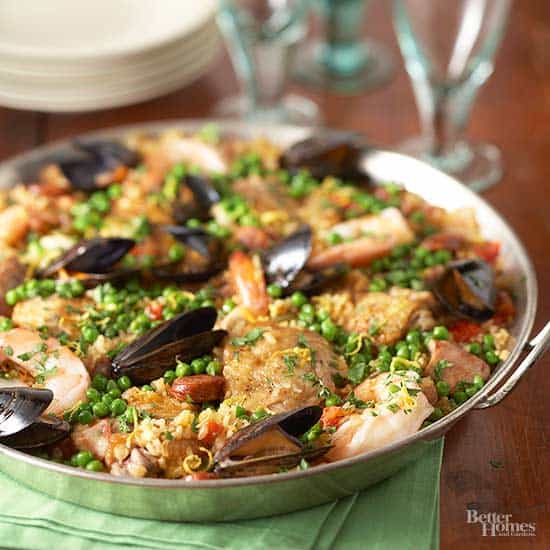 The flavors in this recipe are simply amazing. Far from being a standard paella recipe, this dish includes meats such as pork loin, bacon, shrimp, clam, chicken, and chorizo.

Calamari, lima beans, and roma tomatoes are some of the unique ingredients that make this dish so special. It is filled with a variety of textures, flavors, and aromas. It is a mouth-watering combination of meats and vegetables all cooked in one pan. Get the recipe here.

This may sound like something from another planet, but it is in fact another name for chicken paella. The secret to making this dish come together is the saffron as well as the various spices used to prepare this dish.

In this recipe, the chicken is the star of the show, followed by the rice. Green beans, tomatoes, garlic, and a variety of spices create this red masterpiece. After the ingredients have been added, the dish is left to simmer until it is complete. 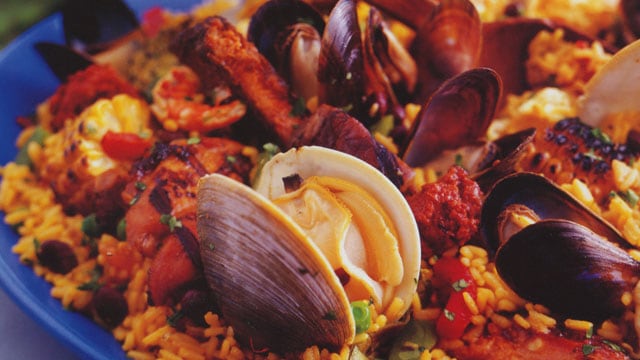 The chef takes his time to prepare a proper tapas paella that is bursting with flavor and that is visually very appetizing. The main focus in this paella is still the rice, as special rice is required to make this paella. 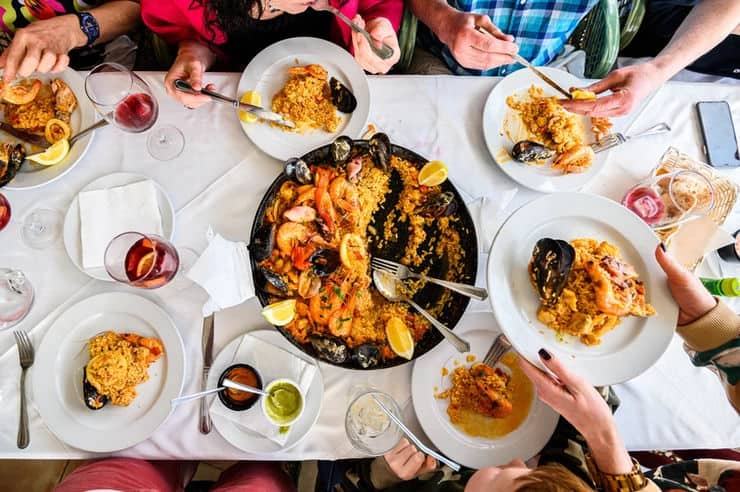 No, there isn’t much of a difference in the ingredients in this paella. The idea is to introduce paella to the Christmas dinner or lunch. The interesting part about this paella recipe is that it uses a good red wine as the base of the sauce before the stock is added.

In addition, the recipe calls for olives, regular rice, dried hot red peppers, as well as thyme. It is a treat for those who adore red wine.

This recipe is focused on individuals that are new to cooking paella. The instructions are very easy to follow and the ingredients include a basic list of the standard ingredients you will find in a paella dish.

The key to making this paella is success is by infusing the saffron with the broth and allowing it to simmer for a few minutes before beginning to cook the paella. This recipe calls for mussels and shrimp. 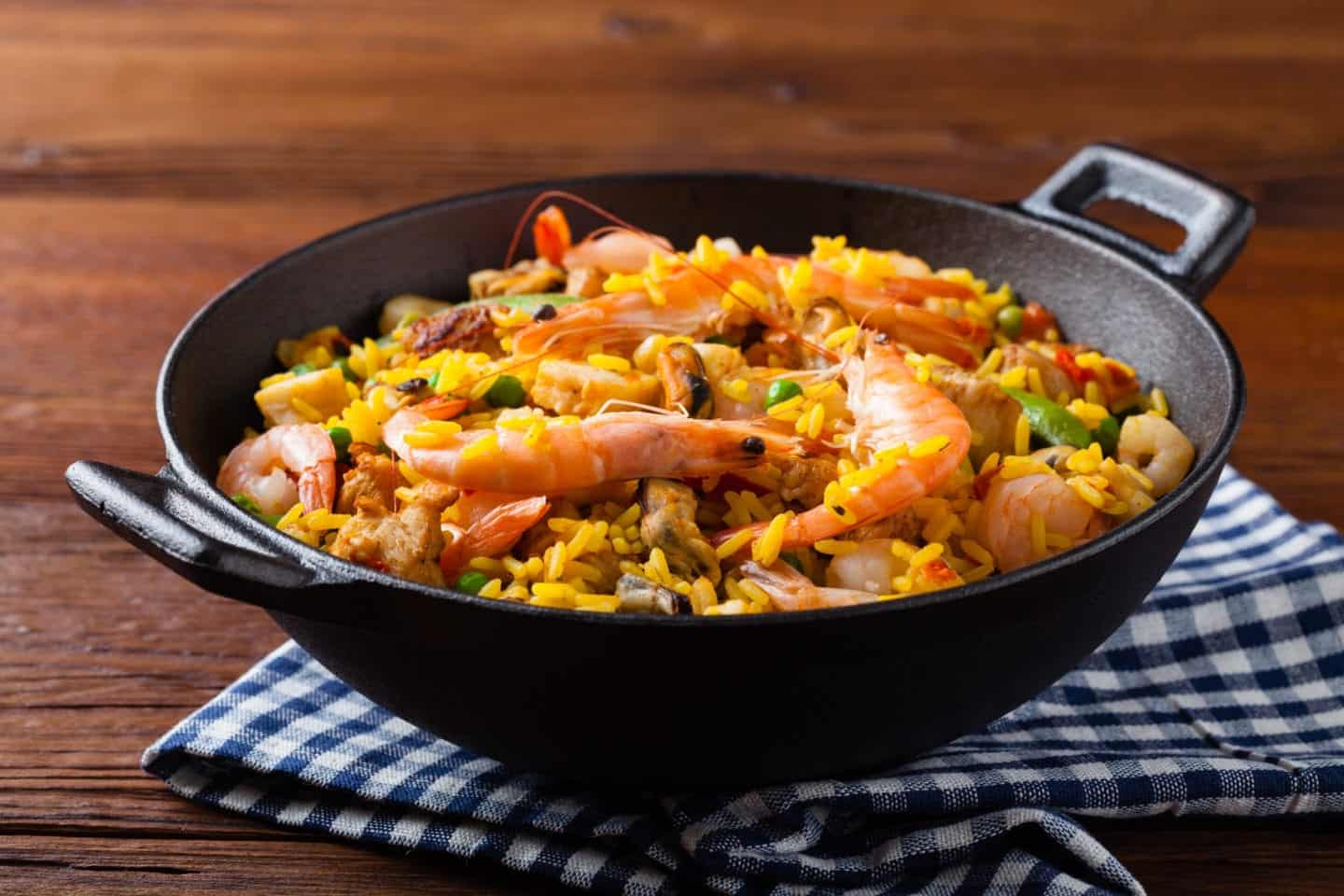 This recipe serves up to eight people and is absolutely gluten free. The idea behind this recipe is that it incorporates both the surf and turf elements of what a mixed paella truly is.

It brings together chicken, shrimp, and clams, and infuses the dish with saffron, cloves, bay leaves, and paprika. It is a basic recipe that is very easy and simple to follow, but the results are nothing short of profoundly flavorful.

Here we have a dish that is bursting with both flavor and color. This recipe calls for simplicity. The ingredients are limited to a few seafood ingredients, vegetables, and spices.

However, do not be fooled, this modest recipe truly packs flavor, aroma, and taste. It’s clear that, apart from the seafood, the rice is the star of the show in this recipe. The chef takes you through the process in a step-by-step process. 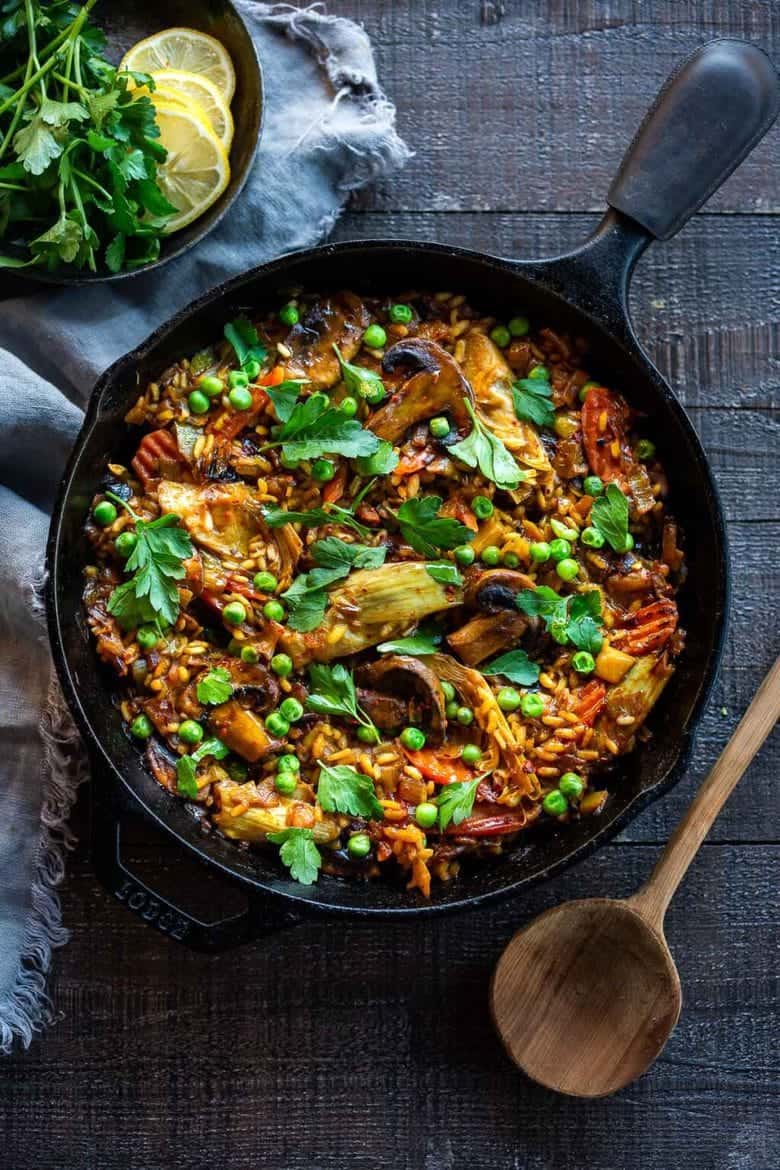 For those individuals that opt to steer clear of any meat products, this recipe may be the one. It maintains all of the flavor of the standard paella dish but without any of the meat products that go along with it.

This paella is rich, full of flavor, and is full of color. The star of the show in this recipe is without a doubt the vegetables. The paella is made in much the same way that a traditional paella is made but without the meat.

As the name suggests, this is a very old and traditional recipe. But do not feel intimidated as it can be prepared by anyone. While the ingredients may seem different from those of a traditional paella, the flavor is not compromised. 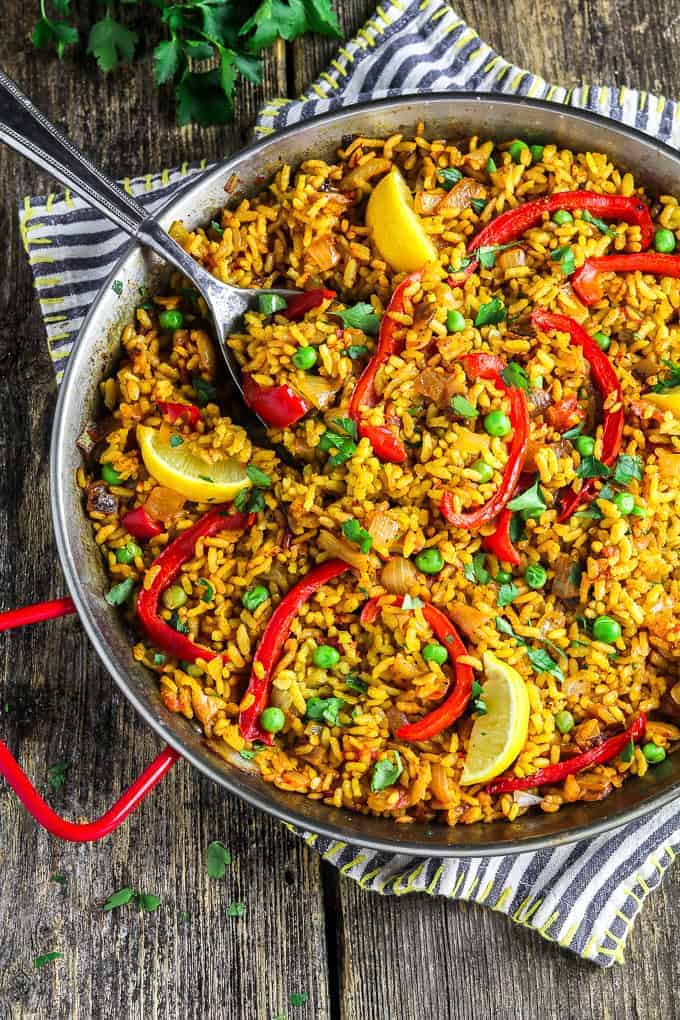 A recipe that caters for vegans that maintains the same amazing taste as paella made with meat. This recipe features a smokey flavor, amazing aroma, and caramelized crust.

This recipe is so delicious that it will be enjoyed by everyone. The important thing to keep in mind is that vegan paella calls for Bomba rice. The great thing about a paella pan is that you are not limited to any specific vegetables. You can set your imagination free.

Didn’t think it was a thing? Well, surprise, surprise it is. A meat paella is simply a Spanish paella but with beef. This recipe will take you step by step through the process of preparing a meat paella.

The recipe incorporates a variety of meats and vegetables without sacrificing flavor. It is as simple as cooking a traditional paella with the exception that a bit more time may be required to cook the meat.

While there are standard recipes to create this dish, the truth is that it is only limited by the imagination of the chef preparing it. Paella is a dish that is fun, vibrant, and bursting with flavor. Depending on the ingredients, this dish pairs exceptionally well with an oak Chardonnay.