French skillet vs. frying pan? They look similar in their sizes and uses. Are they interchangeable? You’re not the only one who gets perplexed in determining the difference between the two cookware. Read on to discover what these two types of cookware are in detail, so you don’t get puzzled anymore.

What is a French Skillet? 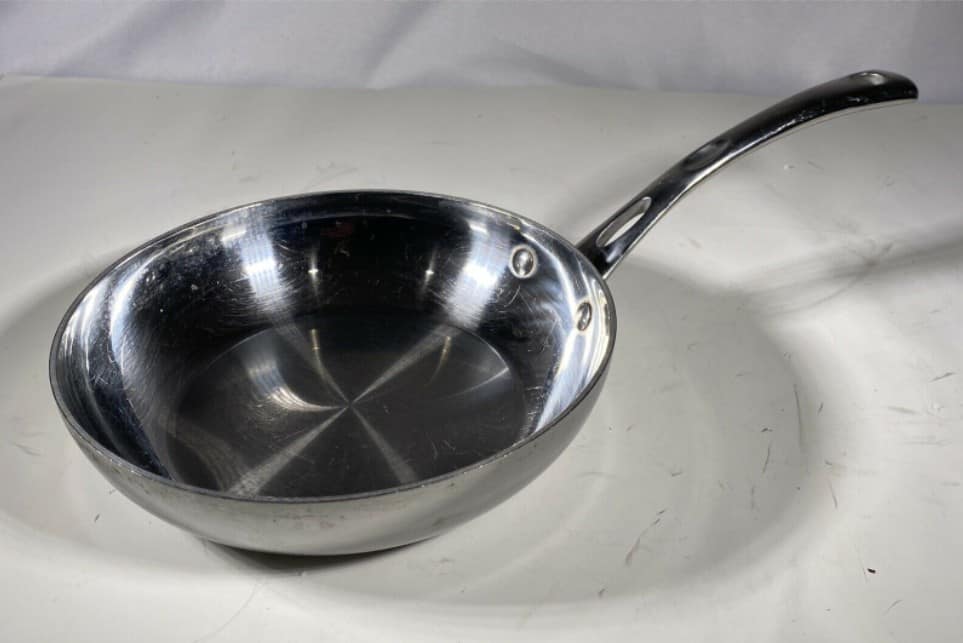 The French skillet is a frying pan and a sauté pan rolled into one. You can fry foods in the skillet and sauté or cook with a light sauce that requires more room.

History of the French Skillet

In 1934, Le Creuset first debuted their iconic French skillet to the United States as a component of their “Art Deco” collection.

The name “French Skillet” applies to any heavy and round-bottomed cookware with a pair of handles and an enamel finish but without a lid.

There are various hypotheses as to how this cookware got the name “French Skillet”:

According to one version, Le Creuset coined the term to promote their product as enticing and exotic.

Another notion is that they were created during World War II when steel was short. Cast iron skillets with enamel were produced as an alternative, making them weigh less than typical pans and pots during those days.

These new skillets immediately acquired appeal among outdoor enthusiasts, making it much easier for soldiers to take them during camping or backpacking trips.

Finally, another theory suggests that French soldiers created these skillets during World War I to prepare food while on patrol without hinting at their location by smoke from burning.

They draped these cooking containers above trench walls so they could enjoy warm meals even without access to ovens or stoves.

Nowadays, “French skillet” refers to the specific design aspects of the cookware rather than its place of origin.

Even big manufacturers such as Cuisinart have shifted much of their skillet production to China. One approach to finding out where a skillet came from is to look underneath.

You can still find French skillets in professional kitchens because they provide good heat dispersion during cooking. But other cooks have shifted to frying pans over time because of their perceived durability and sturdiness.

Features of the French Skillet 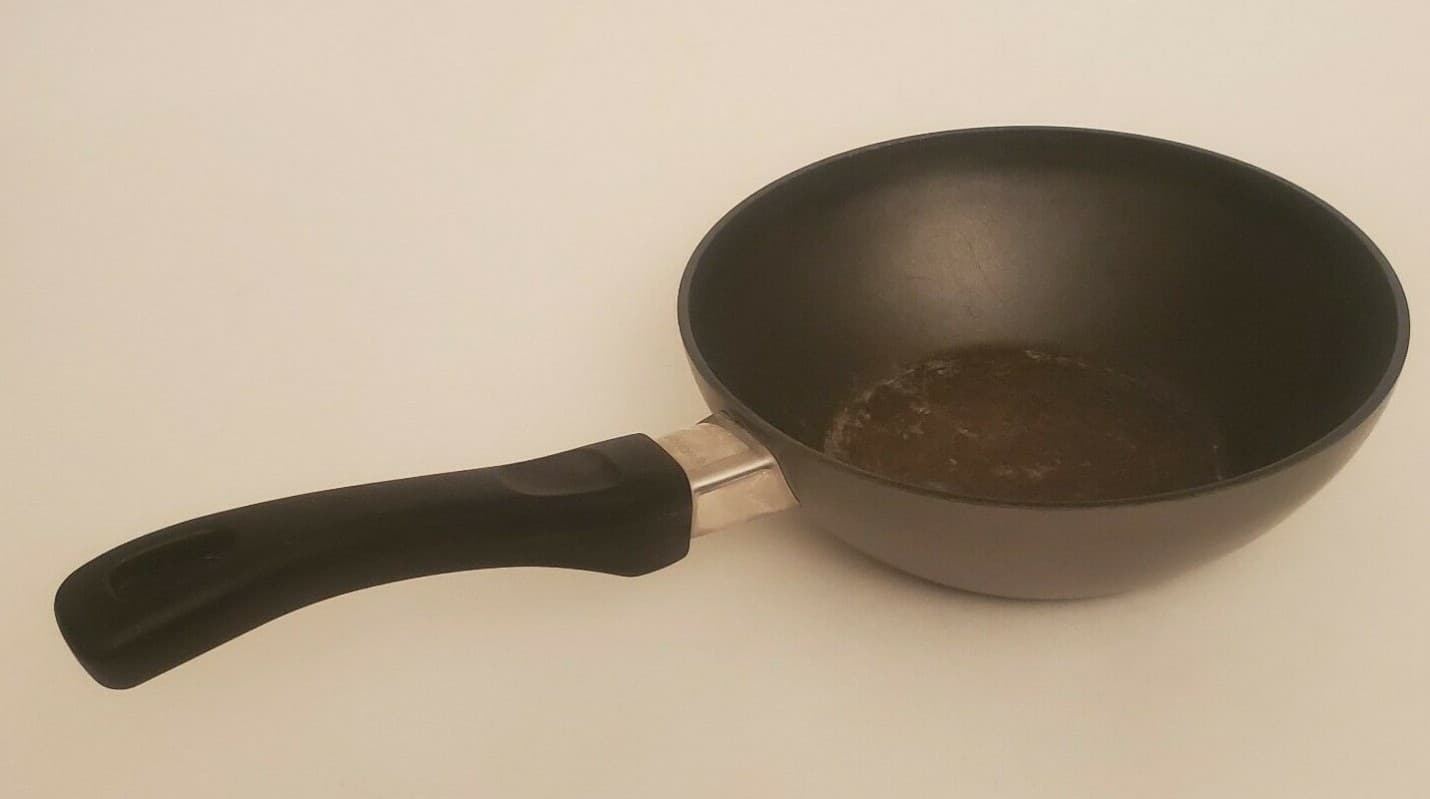 A French skillet is a heavy and thick saucepan usually larger, flatter, and deeper than a regular frying pan. Its size ranges from 9-11 inches, but some come in 8 or 12 inches.

Many cooks have a variety of skillet sizes to handle diverse dishes and portion sizes. If they buy just one French skillet, they generally choose a larger size to have additional cooking possibilities.

The flat bottom allows efficient heat conduction and a larger cooking surface for foods and fluids. You can distribute the food in the skillet due to the bigger size, but the high temperature may cause the food to burn.

The sloped and rounded sides are slightly higher than a frying pan, resulting in two to three inches of steepness. The high edges prevent the oil and other liquids inside from spilling out.

If you fill the French skillet with food, it will cook rather than fry it. However, the extra depth of these skillets can make them a bit more burdensome to store.

The dual-riveted handle is long and made of the same material as the pan. The straight handle makes it easy to move the skillet and provides a secure grip. Some designs sport a grab handle on the front.

While a lid isn’t customary on a French skillet, it shares several characteristics with a sauté pan, so it’s possible to get one with one if you like to preserve the ingredients while cooking.

French skillets are durable because they are all-clad stainless steel with an aluminum or copper interior.  Stainless steel resists corrosion, so the skillet will last longer with less risk of metal seeping into the meal.

Because the pan is made of stainless steel, it may be thinner and lighter. It takes less time to reach the necessary cooking temperature.

The French skillet is frequently less expensive than a frying pan, but this can vary widely depending on the brand and materials used.

Here are a few more details about the French skillet:

Uses of the French Skillet

French skillets are used by those who desire to stick to a low-fat diet, such as sautéing low-fat oil vegetables and browning meats. Many people enjoy braising curries and rich sauces in modern French skillets because they come with lids.

You can use French skillets to prepare various foods, including fried and boiled dishes. You can also use these skillets for poaching liquids or shallow frying.

They are perfect for searing because of the way they disperse heat. They’re also perfect for cooking meats and fish.

However, they also burn food quickly. So, do not use a French skillet for food requiring low heat, such as sauce or creamy cheese.

What is a Frying Pan? 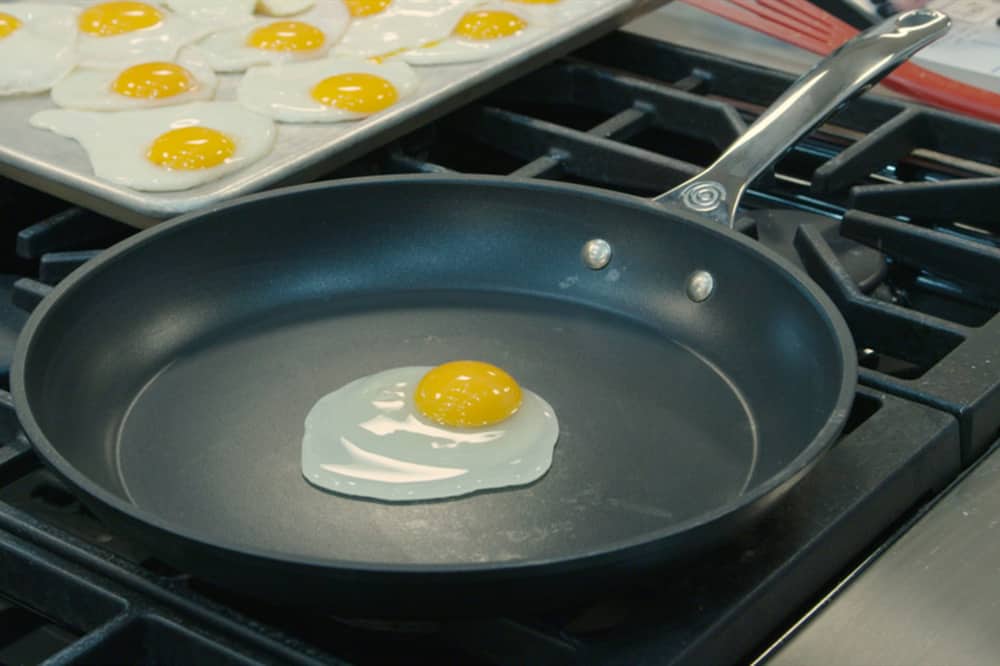 The frying pan is undoubtedly cookware that you use daily. It is adaptable and can do varied cooking that no other equipment can.

When making eggs or pancakes, you’re more likely to use a frying pan than a stockpot. You can fry various foods at high temperatures using a frying pan, as its name suggests.

History of the Frying Pan

Frying pans date back to ancient Mesopotamia and also Rome and Ancient Greece.

According to the U.S. Department of Agriculture, these companies had no interest in quality control or strong market demand and made their products available at low prices.

The commercial brand of stainless-steel frying pans was introduced in America by Lifetime Stainless Products in 1951. Since the pans were composed of metal instead of steel, they offered a less expensive alternative to high-quality frying pans.

Features of the Frying Pan 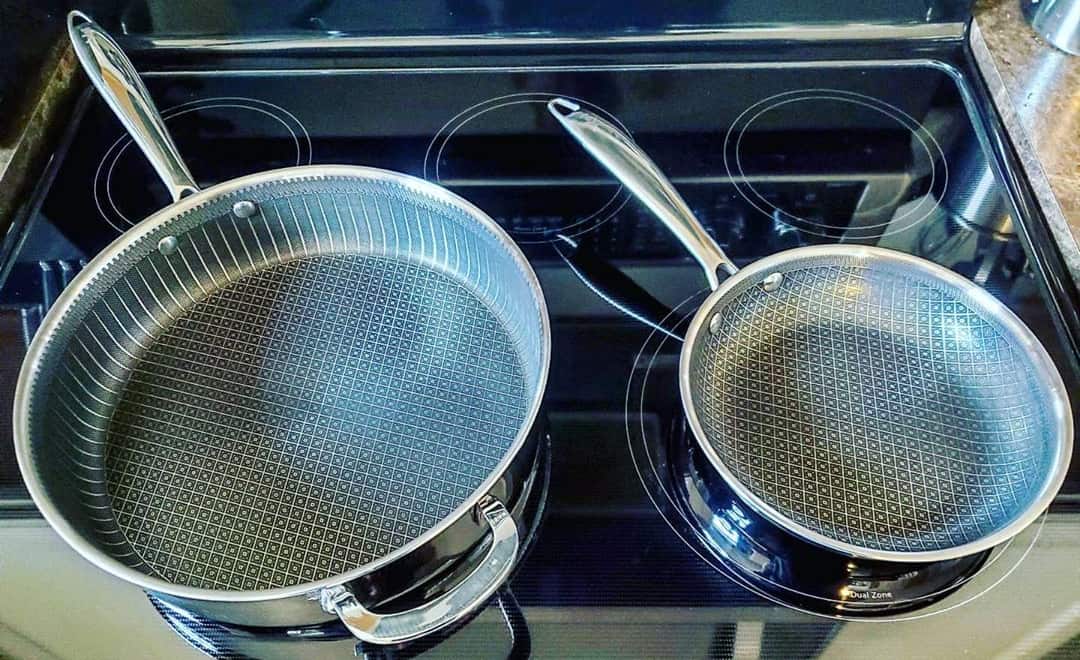 A frying pan sports a shallow broad metal pan with sloping sides and does not have a lid but has an open design for better thermal distribution during cooking.

One of the most significant features is the flat bottom, which provides consistent heat distribution throughout the cooking process. You don’t want your eggs undercooked in some portions due to an uneven cooking area or a poor heat conductor.

Frying pans typically have a diameter of 8 to 12 inches, meaning you can put several different sizes of frying pans in your kitchen.

The lower sides, which flare outwards, are another essential design component. The outward flare makes it easy to toss omelets, pancakes, and other dishes directly from the pan to a plate.

A lip or triangular protrusion in at least one side is a feature that is frequently missing on a French skillet. This lip makes draining and pouring fluids from the frying pan a breeze.

Frying pans also have a longer handle than other pans and an extra grip on the opposite side.

A frying pan can be made of a variety of high-quality metalcore materials. It was originally constructed from heavy cast iron, which is incredibly solid and durable.

New alternatives such as stainless steel, aluminum, copper, and hard anodized have emerged. Aluminum and stainless steel are the most popular types today.

Stainless steel has anti-corrosive qualities and distributes equal heat. It is also long-lasting, sturdy, and non-stick. Since it’s PTFE coated, it poses no health risks.

On the other hand, ceramic pans, which are chemical-free with non-stick cooking surfaces, are also available in some locations, but the only drawback is they do not last long and may crack easily.

Frying pans are a bit more expensive than French skillets.

Below is a table of the distinct features of a frying pan:

Uses of the Frying Pan

As the name implies, the frying pan works best at frying, except for deep frying. It’s perfect for stir-frying, searing meat, and shallow frying since it can handle intense heat while allowing steam to escape quickly.

Because the lower sloping edges allow for easy access and sliding of utensils, it’s ideal for frittatas and egg dishes.

It can also be used to brown food before braising but not for the rest of the procedure. The reduced weight also allows for more maneuverability when shaking and flipping food.

Finally, a frying pan is a flexible cooking vessel that you can use for sautéing, grilling, and baking, among other things.

What’s the difference between a French skillet vs. a frying pan? There aren’t many distinctions between the two cookware, but they are designed for different purposes. Some regard the differences to be minor, while others view them to be significant. Well, you can keep both so you can efficiently prepare tasty dishes. 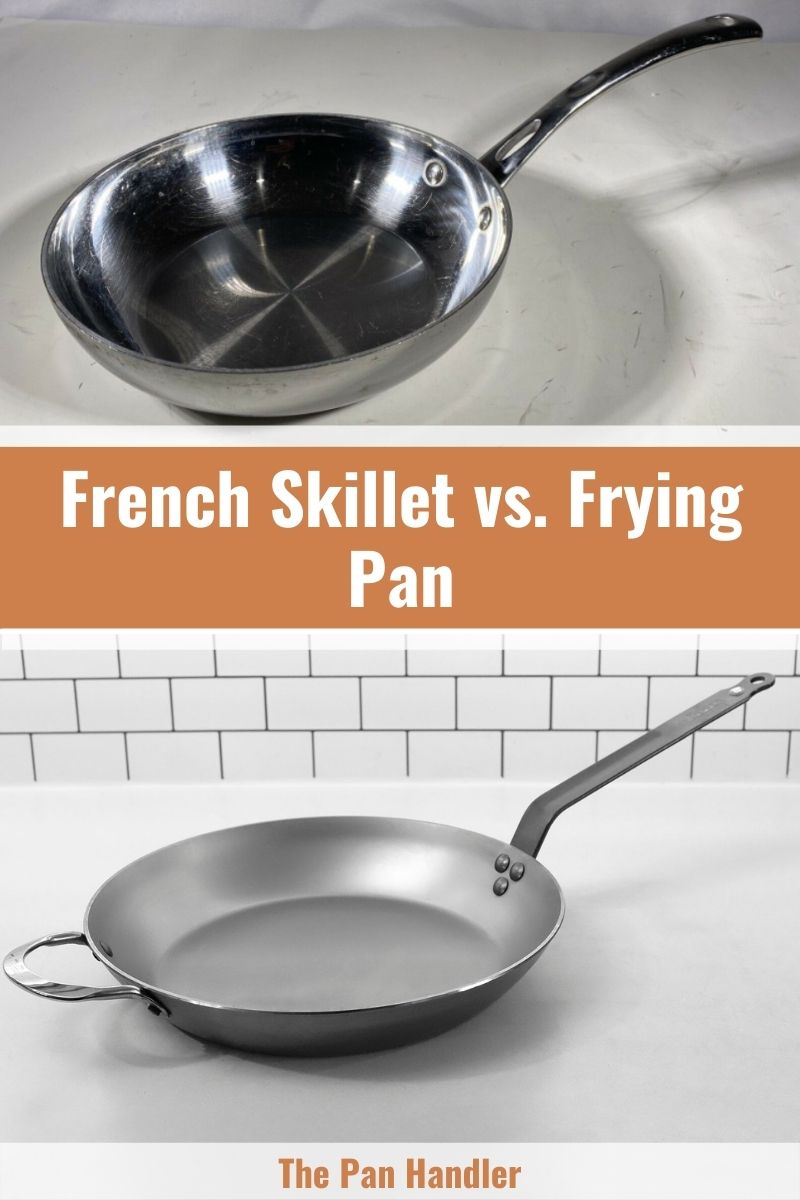