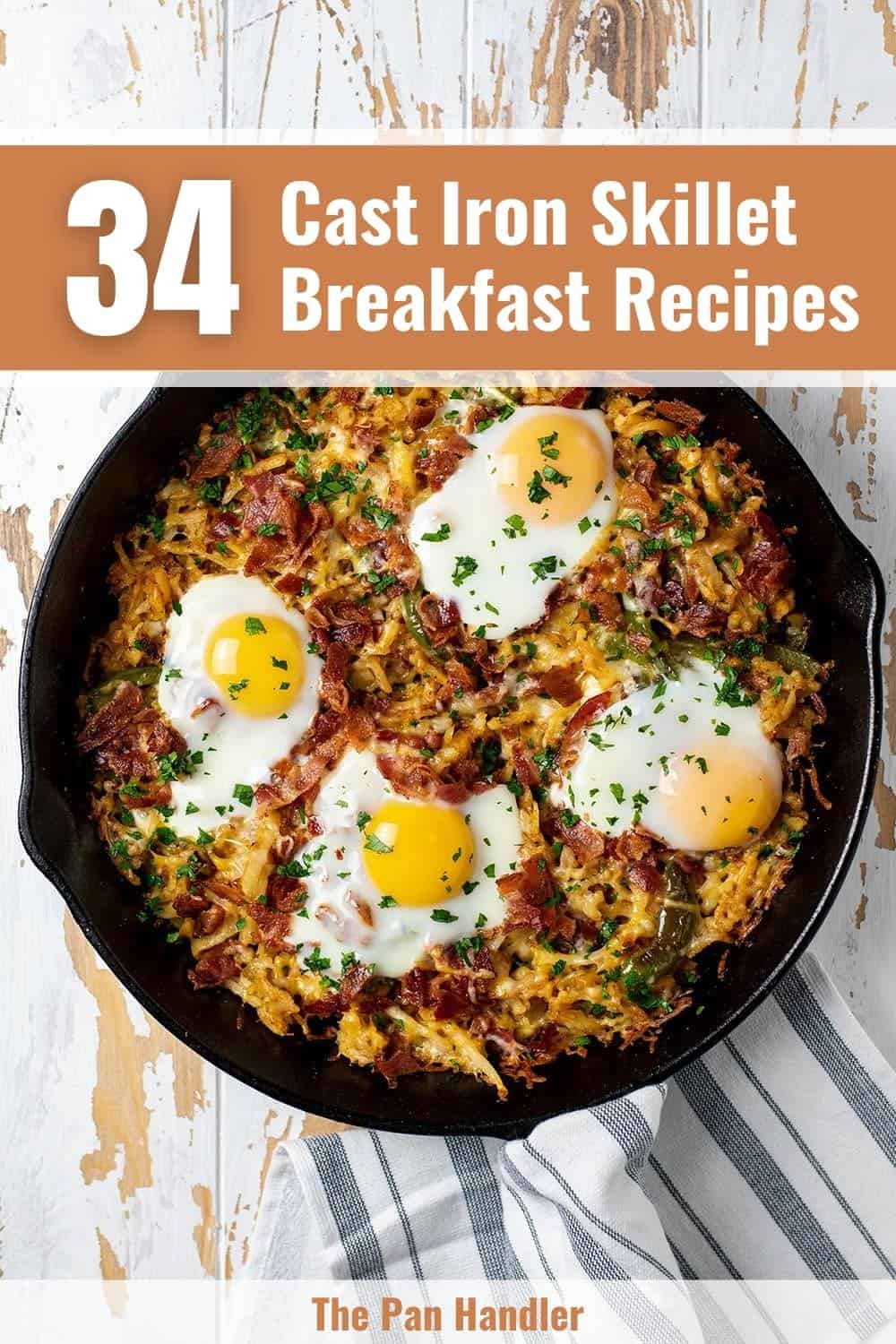 A cast-iron pan is one of the most essential and versatile pieces of equipment in your kitchen toolbox. It can sear, saute, simmer and bake. Cast-iron is non-stick, easy to maintain, and will last a lifetime. One of the best ways to use your cast iron pan is for those all-in-one-pan meals. It’s perfect for whipping up a quick and no-nonsense yet delicious dinner, or even better, breakfast.

Breakfast is that one meal of the day that you want to be easy. Still groggy from the night before, but famished because you haven’t eaten for hours? Then here comes a cast-iron skillet breakfast to the rescue!

It can come together quickly and easily while leaving you with only one pan to clean up. The skillet breakfast can come in a wide variety of options so that you will never get bored. From sweet to savory, classic breakfasts to the interestingly unusual, they are all here.

Here are 34 different ideas of how to use that cast-iron pan to create the breakfast you were dreaming of. Click on the recipe title to get the ingredients, directions and learn more. Enjoy! 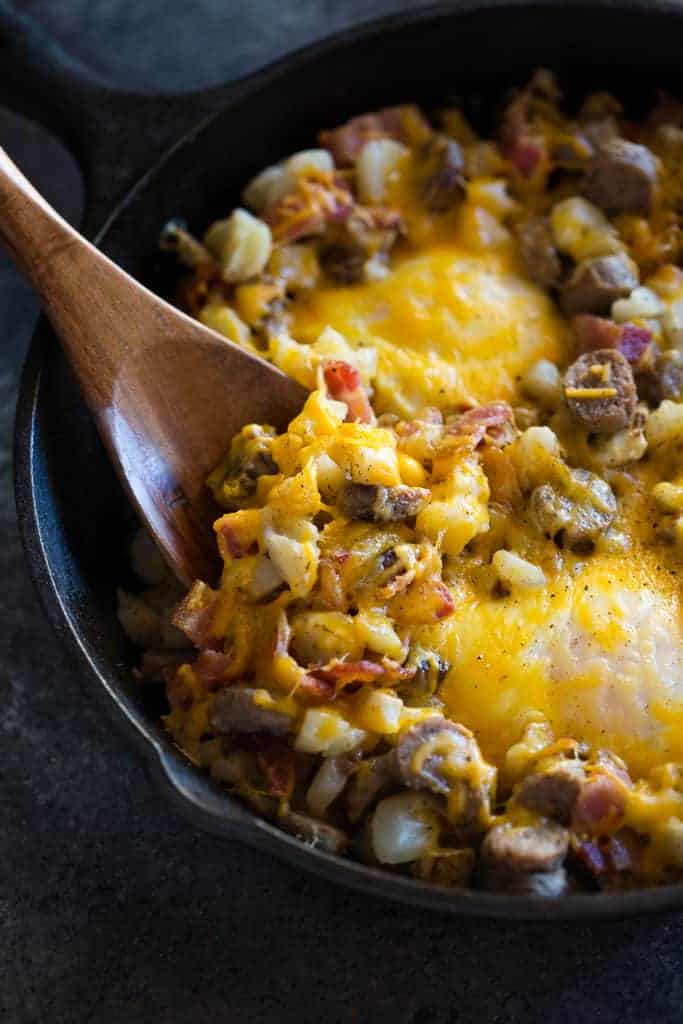 Here’s a great place to start. A classic breakfast with hash browns, eggs and cheese, sausage and bacon all rolled into one. An easy-to-follow recipe that is absolutely satisfying. Just layer, stir and finish it off in the oven.

This recipe takes the classic up a notch or two. Sam the Cooking Guy adds poblanos and red peppers to the hash browns and subs in carnitas for a unique take. He walks you through this delicious skillet breakfast using his grandmother’s cast iron pan, which is decades old. 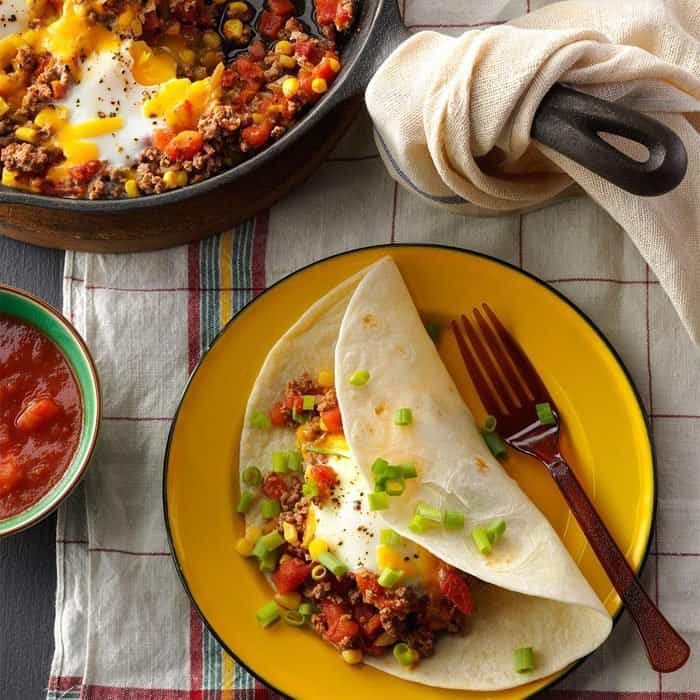 For a little south of the border flavor, here’s a recipe that’s sure to be a hit. Saute ground beef, corn and chilies together, then add eggs and cover. A few minutes later and you’re ready to spoon that into some warm tortillas and chow down.

Do you love sweet potatoes? If so, then this one’s for you. Cooking up sweet potatoes mixed with russet potatoes gives you that perfect balance. Mix in some veggies, breakfast sausage, and season with fresh sage and smoked paprika and you are in breakfast heaven. 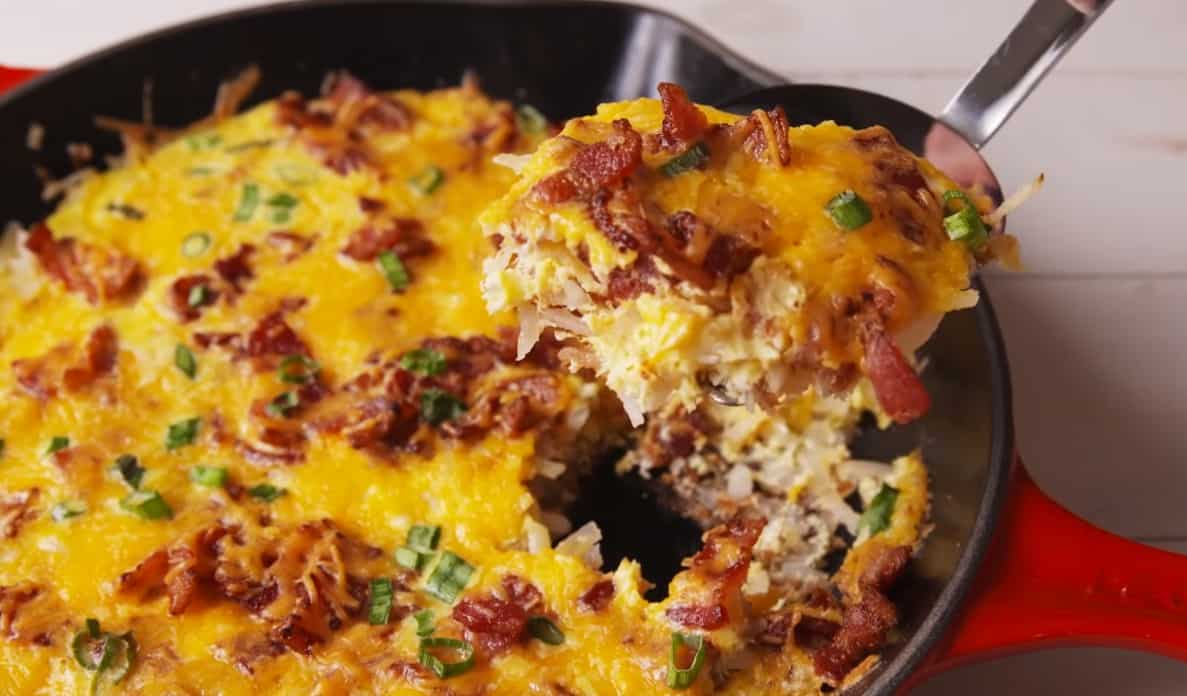 With all the cowboy favorites, bacon, eggs and hashbrowns, this one-pan meal cooks up quickly and easily. Cook the bacon, crisp up the hashbrowns, add scrambled eggs and cheese and then throw it in the oven. It doesn’t get any easier than that.

A cast-iron skillet may be the only pan you need while camping or cooking in the great outdoors. This recipe proves that point with another classic breakfast of bacon and eggs. What makes this memorable is the addition of crumbled potato chips at the end for a sensational crispy topping. 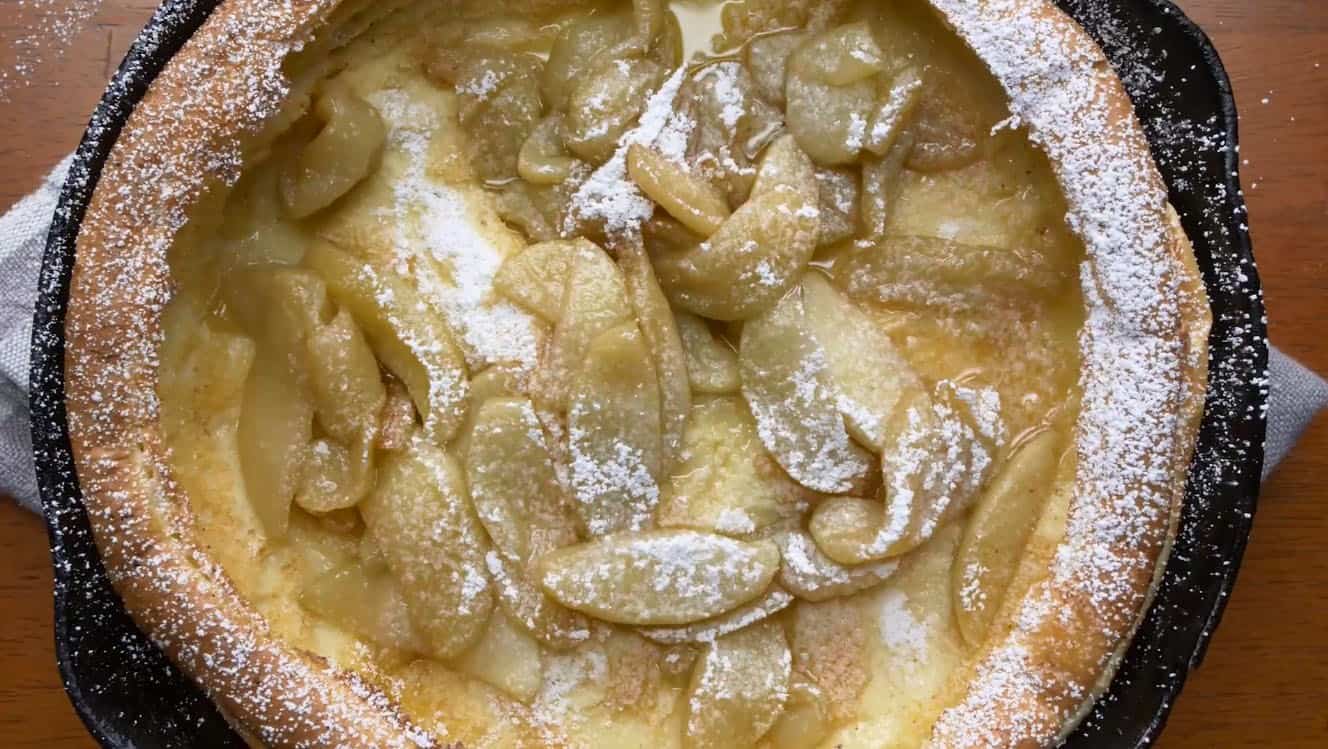 There is no reason you can’t have pie for breakfast. None at all. Try this riff on Dutch baby pancakes and you will be glad you did. Topped with an apple pie-like filling, this recipe will have the kids asking for seconds and thirds.

Speaking of Dutch babies, here is the classic recipe. These are much simpler to make than you might think, especially if you make them in a cast-iron skillet. Finish them off with a generous dusting of powdered sugar, melted butter, and fresh-squeezed lemon juice. 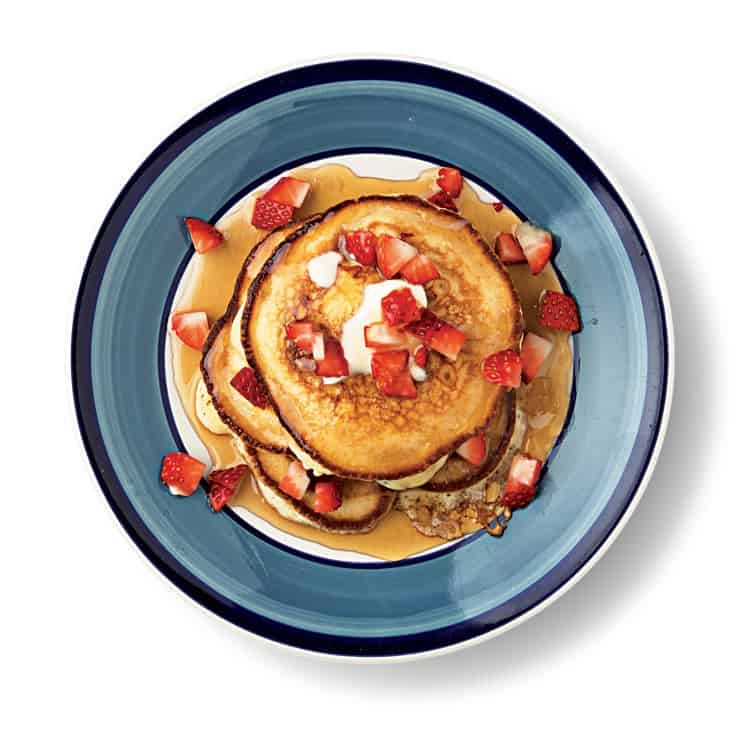 Your cast-iron pan is also perfect for cooking regular pancakes. Try these griddle cakes with strawberries, or any type of fruit, and top them with butter and maple syrup. The cast-iron helps to get those crispy edges that make them even more delicious.

French toast is another way to get mileage with your cast-iron pan. This recipe uses thick brioche bread to soak up the milk and egg mixture before you fry it in the skillet. The addition of orange juice to the batter for a citrus kick really makes it stand out. 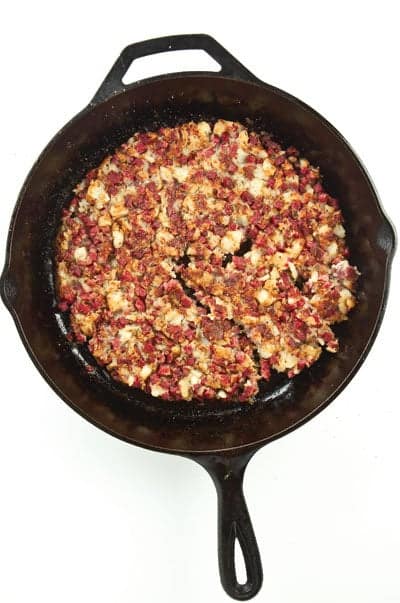 Leftover potatoes and corned beef from the night before come together to create a savory and crispy skillet delight. Serve this with some poached eggs and hollandaise sauce, and you will be glad you saved the leftovers.

A great hash can be one of the heartiest breakfasts you will ever dig into. Try this recipe with ham, bacon and chorizo cooked up with peppers and onions. Top it with some eggs over-easy, and it will keep you going all day long. 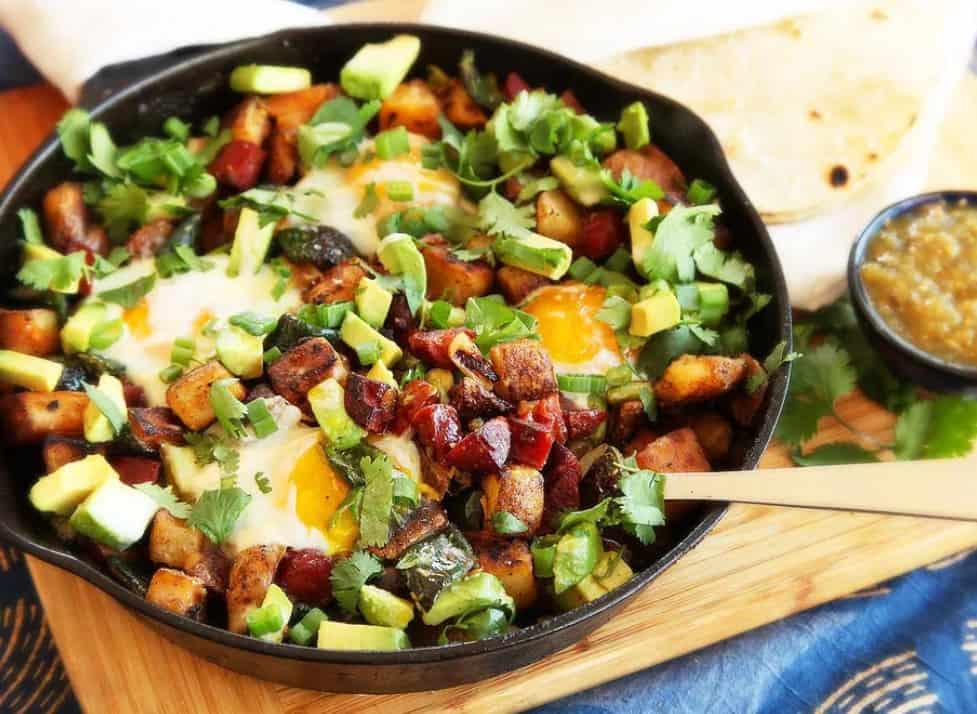 The secret to this recipe is cooking the chorizo first, then using the rendered fat to crisp the potatoes. This adds that extra bit of flavor to this Southwest-inspired hash topped with creamy avocado and cilantro. Add a few eggs and finish it off in the oven. Delicious!

Another great way to get a hearty breakfast is with oatmeal. This recipe will feed an army. Load this up with your favorite berries, whatever is in season. The crispy crust on top contrasted with the creamy interior will be a crowd-pleaser. 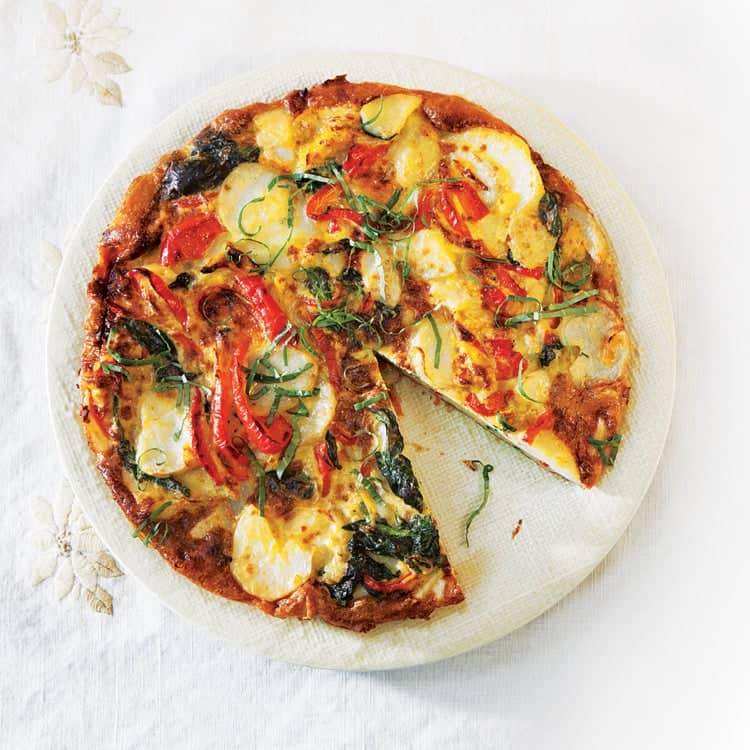 A healthier alternative, this frittata will really hit the spot. Hearty potatoes and classic breakfast vegetables come together in a cast-iron pan for an amazingly colorful and delicious breakfast. The addition of fresh basil really makes this special.

16. Breakfast in One Cast Iron Pan

Mexican-inspired flavors, including smoky chipotle peppers, pack into this one-pan skillet breakfast. Once you have sauteed the peppers, onions and potatoes, the addition of some queso fresco brings it all together. 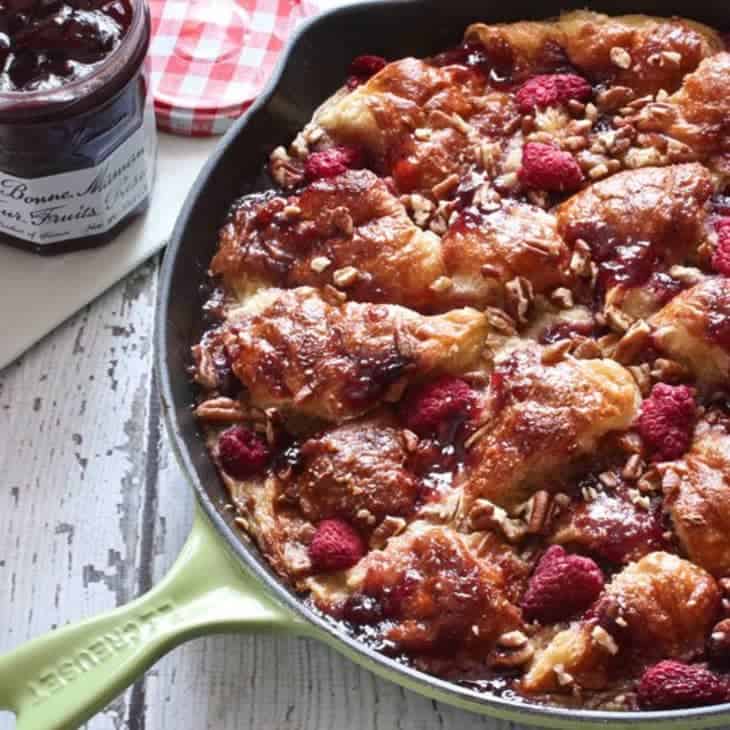 If you are looking for that one special brunch dish for Mother’s Day, or really any day, this is it. Imagine fresh berry preserves and flaky, buttery croissants together with maple syrup and pecans. This one will leave a smile on everyone’s face.

A very interesting take on cast-iron French toast from the mind of chef Bobby Flay. This recipe is a little more involved but definitely worth the extra effort. He uses homemade date molasses, caramelized apples, and middle eastern spices including cardamom and cinnamon for this amazing breakfast idea. 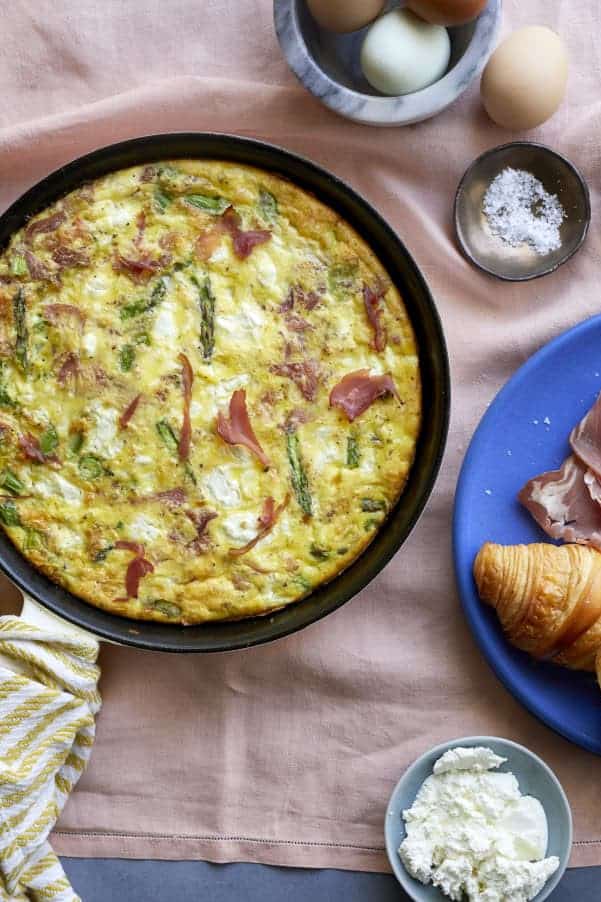 Less fussy than an omelet, the frittata pairs perfectly with a cast-iron skillet cooking method. Asparagus and prosciutto are classic ingredients for this for a reason. They are delicious together. Combined with eggs and cheese, this will be a memorable breakfast that will become a staple in your kitchen.

How about something for Father’s Day? If dad loves steak, this recipe with potatoes, eggs and a ribeye steak is sure to make him happy. It’s pretty simple in its execution. The key is utilizing that cast-iron pan to get an amazing sear on the meat, adding tons of flavor.

21. Grandmother’s Toad in a Hole 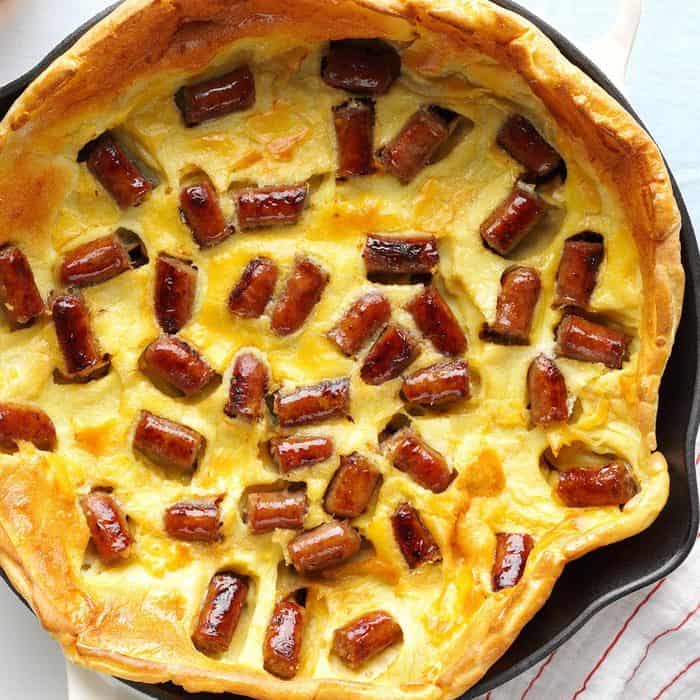 Maybe not the most appetizing name for a dish, but this breakfast is exceptional nonetheless. Basically a german pancake with breakfast sausages, it combines the best of sweet and savory. It is simple and quick to make in a cast-iron skillet, and the kids will love saying the name.

Shakshuka is a delicious breakfast dish from North Africa. Eggs are poached on top of a spicy tomato sauce which is then seasoned with fresh herbs. Serve this incredibly aromatic and savory dish with fresh bread and you’ll be in another world! 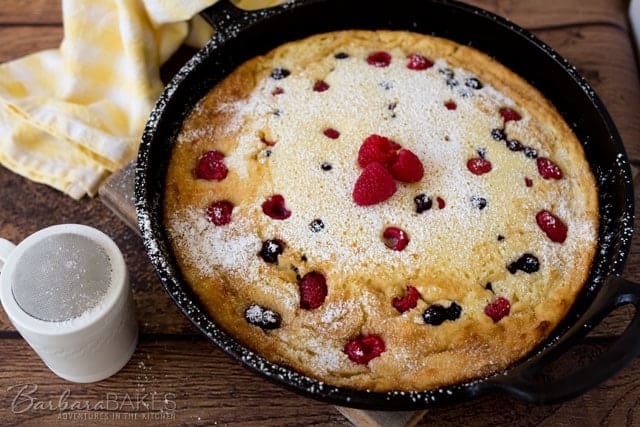 How about cheesecake for breakfast? Well, not quite, but if cheesecake and German pancakes had a love child, this would be it. This recipe has a rich and custardy texture with a hint of lemon and is studded with fresh raspberries. Is your mouth watering yet? Try this recipe.

Quiche is a breakfast classic. Did you know you could whip one up in a cast-iron skillet? You can, buttery crust and all. That’s the best part about this asparagus and cheese quiche. They actually make the crust right in the pan. Check it out. 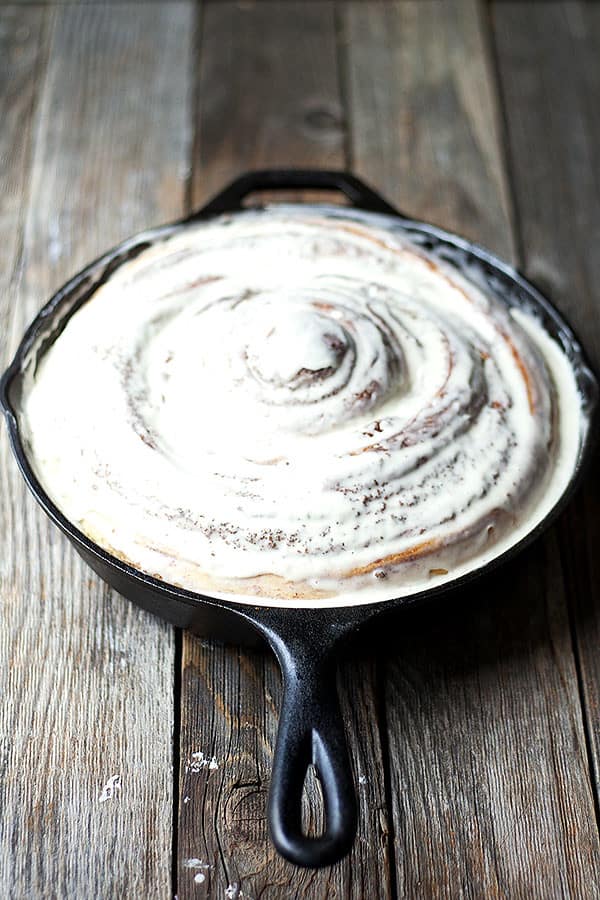 This recipe will get a big “wow” from the family. There’s nothing better than a fresh cinnamon roll right out of the oven, covered in sweet icing. This is a giant version of that. Bigger is better they say. They are right.

Here is another breakfast quiche in a cast-iron skillet, but this time the crust is made of hash browns. You can’t go wrong with a filling of bacon, cheese and mushrooms in this recipe. However, it’s that hash brown crust that makes this so unique. 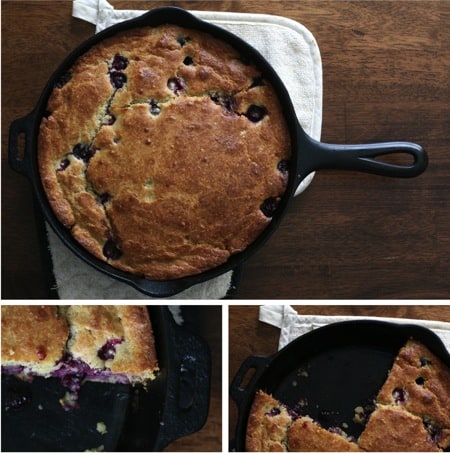 If you love blueberry muffins for breakfast, you will love this recipe. It is, essentially, a giant blueberry muffin baked in a cast-iron skillet. This one is easy to put together and there’s no bothering with muffin tins or paper muffin cups. Just pop it in the oven.

Frittatas are usually on the lighter side of breakfast, and this recipe is a testament to that. Filled full of vegetables like broccoli, spinach, peppers, zucchini and potatoes, this egg dish is super healthy. What gives it a huge boost of flavor, however, is the feta cheese.

This is a vegetarian-friendly version, but of course, you can add anything you like to it including some chorizo sausage. You won’t miss the meat though, as this is packed with protein-filled beans and cooked with a tortilla shell. Topped with an egg, this is a pretty healthy and filling meal.

Sweet potatoes and bacon are a combo made in heaven. Here is another riff on a classic hash but with lots of vegetables. Its flavor profile is very earthy and savory with mushrooms, greens and cumin threw into the mix. Feta cheese sprinkled on top takes this to another world. 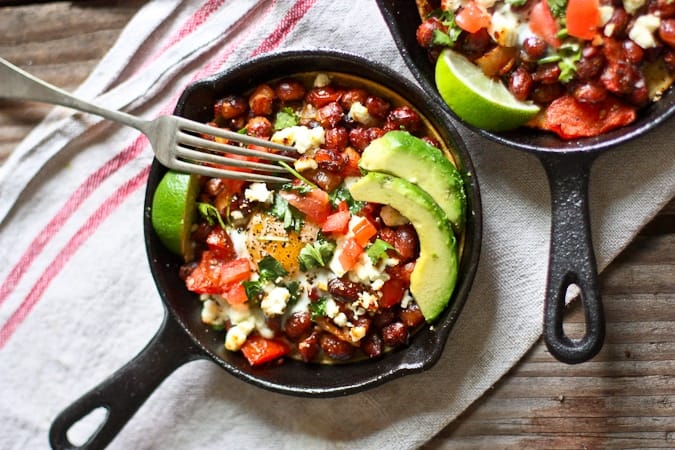 One of the simplest and easiest breakfast treats to make. This is made with ingredients you probably already have lying around the house. Leftover bread, some apples, butter, sugar and cinnamon are all you need to quickly create this skillet breakfast.

Biscuits and gravy in a cast-iron pan is the quintessential country breakfast. This recipe calls for cooking them in a BBQ, which adds a wonderful smoky flavor. However, they could also be made on the stovetop. You could also add some sausage to take it up a notch.

How about a decadent, buttery indulgence with a coffee cake made in that cast-iron skillet? Here is the perfect recipe for that. Made with butter and sour cream, sprinkled with cinnamon and sugar, this will become your favorite. Imagine this with a steaming mug of coffee. It’s all you need. 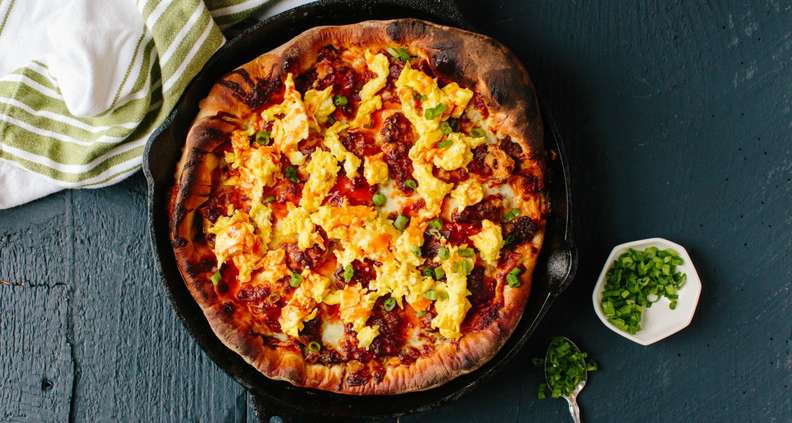 Pizza is definitely for breakfast. It doesn’t have to be leftovers from the night before, however. You can use that cast-iron skillet to cook up this pizza with eggs and sausage. Cast-iron imparts unique crispiness to the pizza dough when cooked in the oven due to its heat retention properties. 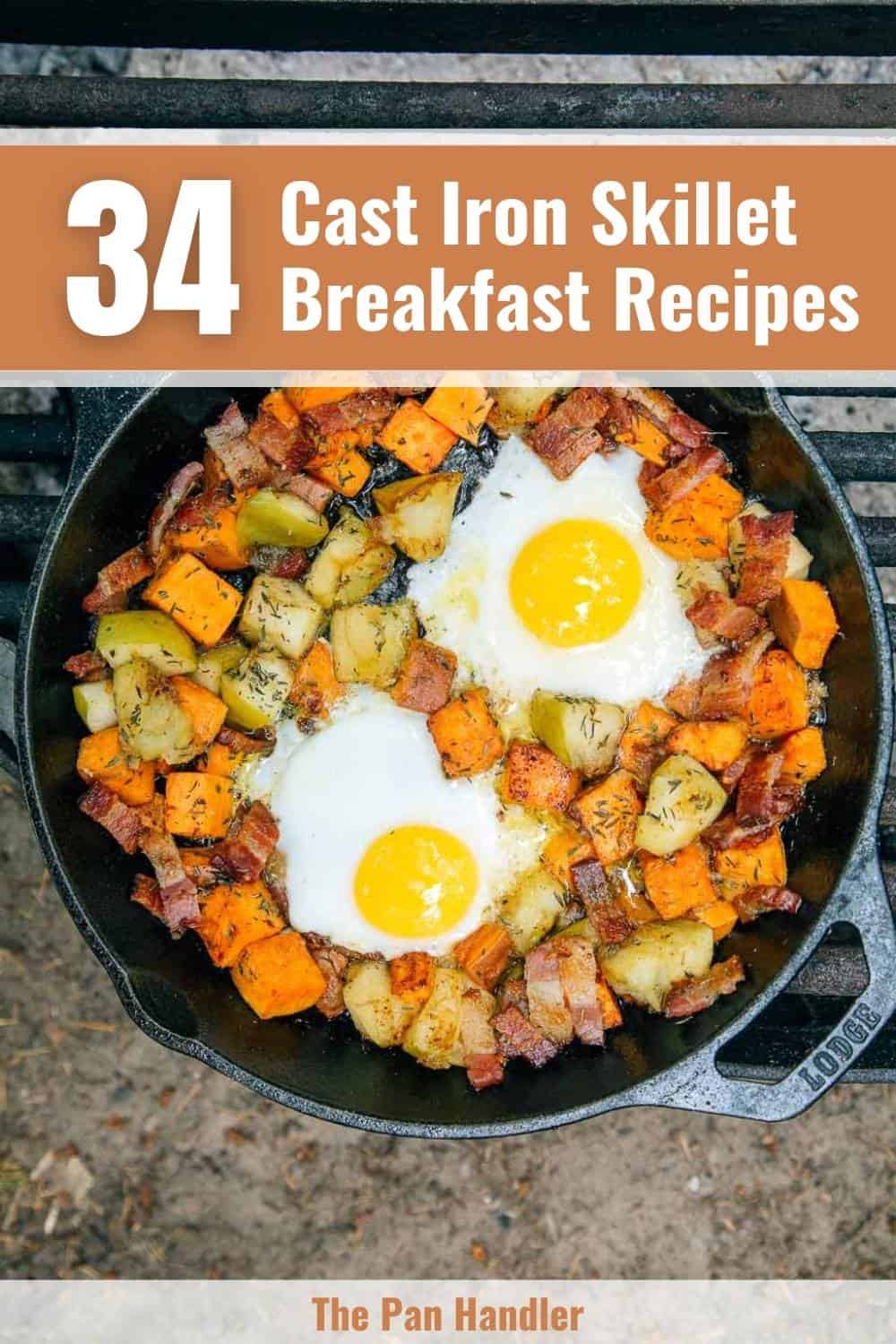